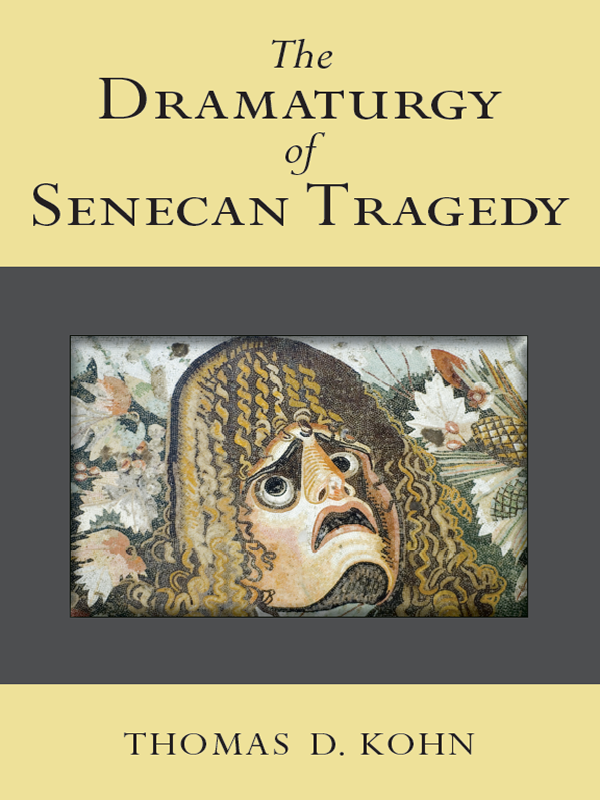 The Dramaturgy of Senecan Tragedy

You do not have access to this book. How to get access.
The first-century Roman tragedies of Seneca, like all ancient drama, do not contain the sort of external stage directions that we are accustomed to today; nevertheless, a careful reading of the plays reveals such stage business as entrances, exits, setting, sound effects, emotions of the characters, etc. The Dramaturgy of Senecan Tragedy teases out these dramaturgical elements in Seneca's work and uses them both to aid in the interpretation of the plays and to show the playwright's artistry.

Thomas D. Kohn provides a detailed overview of the corpus, laying the groundwork for appreciating Seneca's techniques in the individual dramas. Each of the chapters explores an individual tragedy in detail, discussing the dramatis personae and examining how the roles would be distributed among a limited number of actors, as well as the identity of the Chorus. The Dramaturgy of Senecan Tragedy makes a compelling argument for Seneca as an artist and a dramaturg in the true sense of the word: "a maker of drama." Regardless of whether Seneca composed his plays for full-blown theatrical staging, a fictive theater of the mind, or something in between, Kohn demonstrates that he displays a consistency and a careful attentiveness to details of performance. While other scholars have applied this type of performance criticism to individual tragedies or scenes, this is the first comprehensive study of all the plays in twenty-five years, and the first ever to consider not just stagecraft, but also metatheatrical issues such as the significant distribution of roles among a limited number of actors, in addition to the emotional states of the characters. Scholars of classics and theater, along with those looking to stage the plays, will find much of interest in this study.