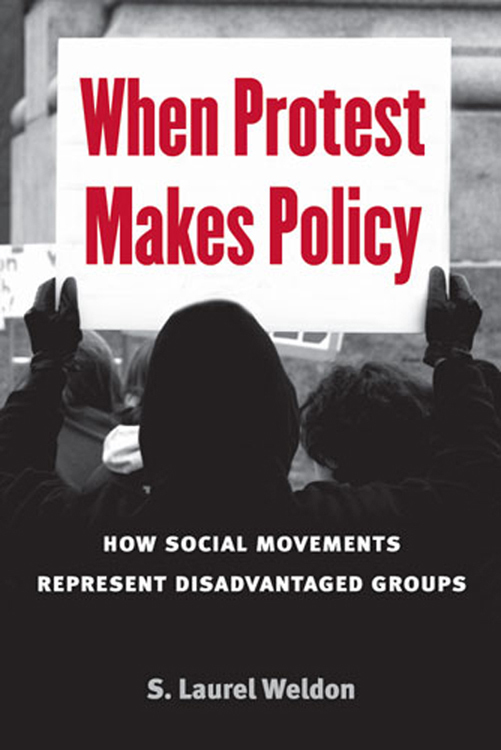 S. Laurel Weldon 2011
"A must-read for scholars across a broad sweep of disciplines. Laurel Weldon weaves together skillfully the theoretical strands of gender equality policy, intersectionality, social movements, and representation in a multimethod/level comparative study that unequivocally places women's movements at the center of our understanding of democracy and social change."

"This is a bold and exciting book. There are many fine scholars who look at women's movements, political theorists who make claims about democracy, and policy analysts who do longitudinal treatments or cross-sectional evaluations of various policies. I know of no one, aside from Weldon, who is comfortable with all three of these roles."

Through a series of case studies of movements conducted by women, women of color, and workers in the United States and other member nations of the Organisation for Economic Co-operation and Development (OECD), Weldon examines processes of representation at the local, state, and national levels. She concludes that, for systematically disadvantaged groups, social movements can be as important---sometimes more important---for the effective articulation of a group perspective as political parties, interest groups, or the physical presence of group members in legislatures.

When Protest Makes Policy contributes to the emerging scholarship on civil society as well as the traditional scholarship on representation. It will be of interest to anyone concerned with advancing social cohesion and deepening democracy and inclusion as well as those concerned with advancing equality for women, ethnic and racial minorities, the working class, and poor people.