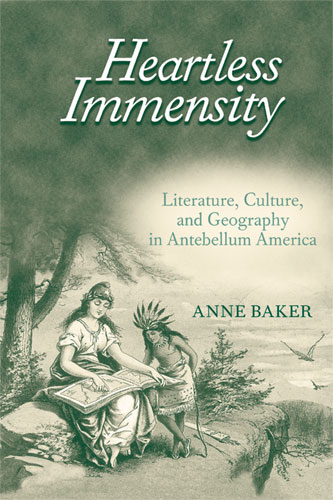 You do not have access to this book. How to get access.
As the size of the United States more than doubled during the first half of the nineteenth century, a powerful current of anxiety ran alongside the well-documented optimism about national expansion. Heartless Immensity tells the story of how Americans made sense of their country's constantly fluctuating borders and its annexation of vast new territories. Anne Baker looks at a variety of sources, including letters, speeches, newspaper editorials, schoolbooks, as well as visual and literary works of art. These cultural artifacts suggest that the country's anxiety was fueled primarily by two concerns: fears about the size of the nation as a threat to democracy, and about the incorporation of nonwhite, non-Protestant regions. These fears had a consistent and influential presence until after the Civil War, functioning as vital catalysts for the explosion of literary creativity known as the "American Renaissance," including the work of Melville, Thoreau, and Fuller, among others.

Building on extensive archival research as well as insights from cultural geographers and theorists of nationhood, Heartless Immensity demonstrates that national expansion had a far more complicated, multifaceted impact on antebellum American culture than has previously been recognized. Baker shows that Americans developed a variety of linguistic strategies for imagining the form of the United States and its position in relation to other geopolitical entities. Comparisons

to European empires, biblical allusions, body politic metaphors, and metaphors derived from science all reflected—and often attempted to assuage—fears that the nation was becoming either monstrously large or else misshapen in ways that threatened cherished beliefs and national self-images.

Heartless Immensity argues that, in order to understand the nation's shift from republic to empire and to understand American culture in a global context, it is first necessary to pay close attention to the processes by which the physical entity known as the United States came into being. This impressively thorough study will make a valuable contribution to the fields of American studies and literary studies.