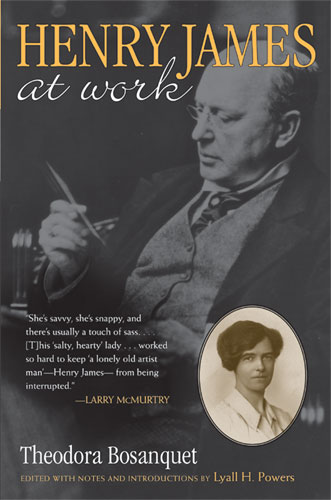 You do not have access to this book. How to get access.
A new edition of the delightful 1924 memoir by James's longtime secretary, with a biographical essay and excerpts from her diaries

Theodora Bosanquet was Henry James's secretary from 1907 until his death in 1916, one of the most significant periods of his long writing career. Her memoir Henry James at Work, originally published by Leonard and Virginia Woolf's Hogarth Press in 1924, recounts Bosanquet's association with James and provides a lively and engaging commentary on James's milieu, preferences, and attitudes, as well as on his process of writing and revision. Bosanquet is an intelligent and observant witness and reporter, and her objective and comparatively unbiased point of view makes the memoir especially valuable.

This enlarged and annotated edition rescues Bosanquet from the shadows of literary history and shows her to be a fascinating figure in her own right, a skilled writer and editor, an early feminist, and a contemporary of the Bloomsbury literary community. The book is enhanced by an essay about Bosanquet and her circle, and fascinating snippets from her diaries and letters, now in the Harvard University archives.

Soon after Henry James hired Theodora Bosanquet in 1907, the well-educated and dedicated Bosanquet became indispensable to James. In addition to the memoir Henry James at Work she published two other books, critical studies on Harriet Martineau and Paul Valéry. Following James's death she became Executive Secretary of the International Federation of University Women and traveled extensively in support of the women's suffrage movement. From 1935 to 1958 she was literary editor, then director, of the publication Time and Tide.

Lyall H. Powers is Professor of English Emeritus at the University of Michigan and author of numerous books, including Alien Heart: The Life and Work of Margaret Laurence.

Praise for Henry James at Work:

"I'm sure [your book] ought to have a success with anyone who cared for Henry James and his work, and I think we are very lucky to get it."

"It's fascinating to encounter, in the era just before high modernism, a female intellectual like Bosanquet—one as fully engaged in the life of ideas and cultural production as her male counterparts—making as much of her putatively secondary status as she possibly could. The book is important as a primary document in its own right as well as a gloss on the methods and material of the magisterial James."