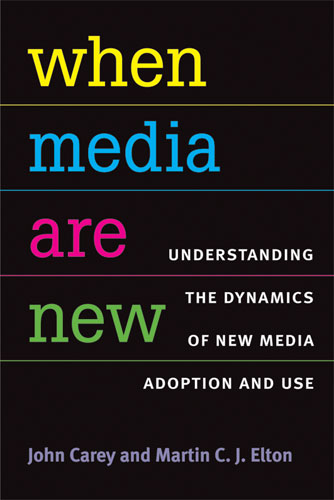 When Media Are New: Understanding the Dynamics of New Media Adoption and Use

Open Access
"John Carey and Martin Elton are among the most skilled and insightful researchers studying the dynamic changes in technology and the impacts on consumer attitudes and behaviors. Their comprehensive and actionable observations make this a must read for anyone interested in understanding the current (and future) media environment."

"When Media Are New should be read by every media manager faced with disruptive change brought on by new technology. The book transcends the fashionable topics and themes that are here today and gone tomorrow and instead places emphasis on those areas of research and implementation where fatal mistakes are made. They capture something universal, and therefore highly useful, by stripping away the hype and focusing relentlessly on consumers and the ways they adopt or fail to adopt new media products and technologies into their lives."

"The burgeoning development of the Internet has deflected attention from a wider history of new media innovations that has shaped its success. John Carey and Martin Elton demonstrate that earlier initiatives to launch videophones, two-way interactive cable systems, videotext and other media innovations can teach us much about the present state and future course of information and communication technologies. This is a key reference on the new media, and must reading for students of the Internet---the platform for continuing the new media revolution."

The world of communication media has undergone massive changes since the mid-1980s. Along with the extraordinary progress in technological capability, it has experienced stunning decreases in costs; a revolutionary opening up of markets (a phenomenon exemplified by but not limited to the rise of the Internet); the advent of new business models; and a striking acceleration in the rate of change. These technological, regulatory, and economic changes have attracted the attention of a large number of researchers, from industry and academe, and given rise to a substantial body of research and data. Significantly less attention has been paid to the actual and intended users of new media. When Media Are New addresses this research and publishing gap by investigating the human side of the technological changes of the last 50 years and the implications for current and future media. It will find a broad audience ranging from media scholars to policymakers to industry professionals.

John Carey is Professor of Communications and Media Management at Fordham Business School and has extensive experience in conducting research about new media for companies such as AT&T, Cablevision, NBC Universal, and the New York Times (among many others) as well as foundations and government agencies. His extensive publications have focused on user adoption of new media and how consumers actually use new technologies.

Martin C. J. Elton was Director of the Communication Studies Group in the UK, which pioneered in the study of user behavior with new media technologies, and founded the Interactive Telecommunication Program at New York University. He has published widely on user research, forecasting, and public policy and has conducted extensive research for many prominent foundations, companies, and government agencies in the USA and Europe. 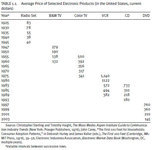 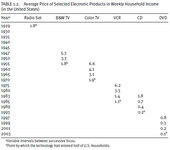