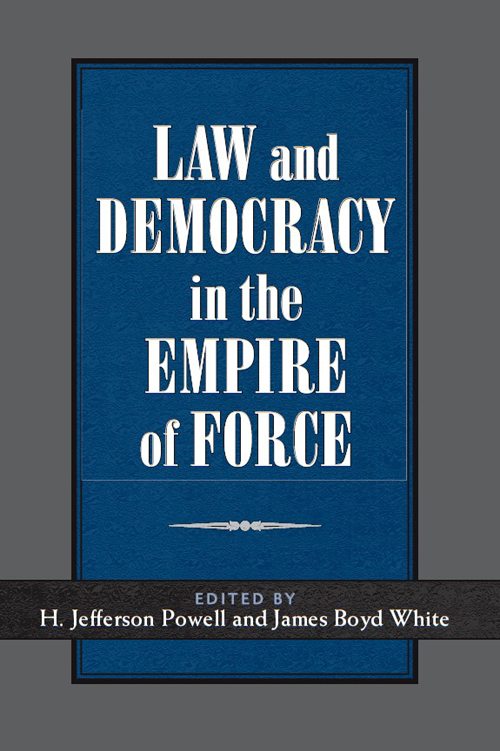 Law and Democracy in the Empire of Force

You do not have access to this book. How to get access.
The authors of this book share a concern for the state of law and democracy in our country, which to many seems to have deteriorated badly. Deep changes are visible in a wide array of phenomena: judicial opinions, the teaching of law, legal practice, international relations, legal scholarship, congressional deliberations, and the culture of contemporary politics. In each of these intersections between law, culture, and politics, traditional expectations have been transformed in ways that pose a threat to the continued vitality and authority of law and democracy.

The authors analyze specific instances in which such a decline has occurred or is threatened, tracing them to "the empire of force," a phrase borrowed from Simone Weil. This French intellectual applied the term not only to the brute force used by police and soldiers but, more broadly, to the underlying ways of thinking, talking, and imagining that make that sort of force possible, including propaganda, unexamined ideology, sentimental clichés, and politics by buzzwords, all familiar cultural forms.

Based on the underlying crisis and its causes, the editors and authors of these essays agree that neither law nor democracy can survive where the empire of force dominates. Yet each manages to find a ground for hope in our legal and democratic culture.

H. Jefferson Powell is Frederic Cleaveland Professor of Law and Divinity at Duke University and has served in both the federal and state governments, as a deputy assistant attorney general and as principal deputy solicitor general in the U.S. Department of Justice and as special counsel to the attorney general of North Carolina. His latest book is Constitutional Conscience: The Moral Dimension of Judicial Decision.

James Boyd White is Hart Wright Professor of Law emeritus and Professor of English emeritus, at the University of Michigan. His latest book is Living Speech: Resisting the Empire of Force.

"An extraordinary collection of provocative, insightful, and inspiring essays on the future of law and democracy in the twenty-first century."