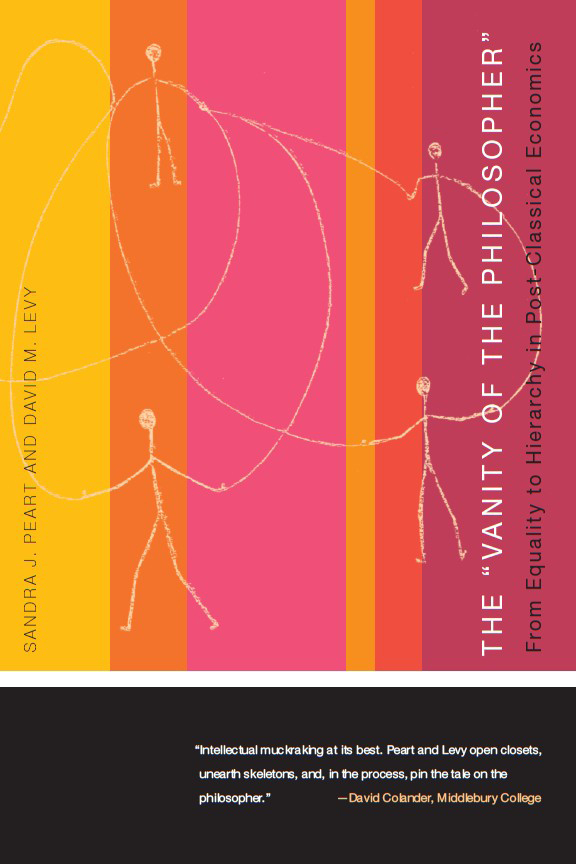 The "Vanity of the Philosopher": From Equality to Hierarchy in Post-Classical Economics

Sandra J. Peart and David M. Levy 2005
The "Vanity of the Philosopher" continues the themes introduced in Levy's acclaimed book How the Dismal Science Got Its Name.

Here, Peart and Levy tackle the issues of racism, eugenics, hierarchy, and egalitarianism in classical economics and take a broad view of classical economics' doctrine of human equality. Responding to perennial accusations from the left and the right that the market economy has created either inequality or too much equality, the authors trace the role of the eugenics movement in pulling economics away from the classical economist's respect for the individual toward a more racist view at the turn of the century.

The "Vanity of the Philosopher" reveals the consequences of hierarchy in social science. It shows how the "vanity of the philosopher" has led to recommendations that range from the more benign but still objectionable "looking after" paternalism, to overriding preferences, and, in the extreme, to eliminating purportedly bad preferences. The authors suggest that an approach that abstracts from difference and presumes equal competence is morally compelling.

"People in the know on intellectual history and economics await the next book from Peart and Levy with much the same enthusiasm that greets a new Harry Potter book in the wider world. This book delivers the anticipated delights big time!"

"In their customary idiosyncratic manner, Sandra Peart and David Levy reexamine the way in which the views of classical economists on equality and hierarchy were shifted by contact with scholars in other disciplines, and the impact this had on attitudes towards race, immigration, and eugenics. This is an imaginative and solid work of scholarship, with an important historical message and useful lessons for scholars today."

Sandra J. Pear t, Professor of Economics at Baldwin-Wallace College, has published articles on utilitarianism, the methodology of J. S. Mill, and the transition to neoclassicism. This is her fourth book. David M. Levy is Professor of Economics at George Mason University and Director of the Center for Study of Public Choice. This is his third book.