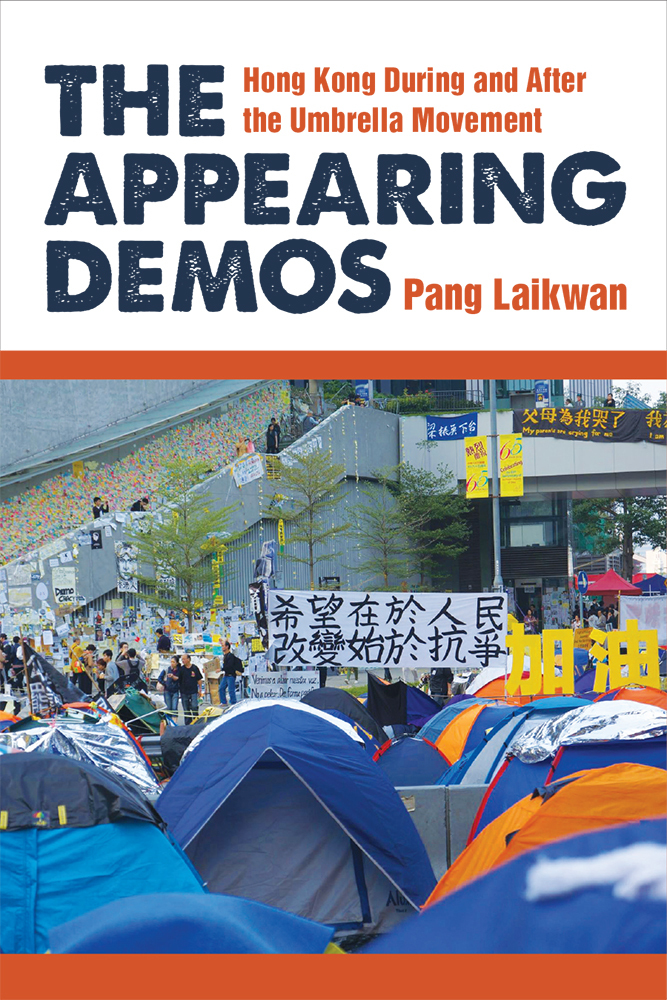 The Appearing Demos: Hong Kong During and After the Umbrella Movement

Pang Laikwan 2020
As the waves of Occupy movements gradually recede, we soon forget the political hope and passions these events have offered. Instead, we are increasingly entrenched in the simplified dichotomies of Left and Right, us and them, hating others and victimizing oneself. Studying Hong Kong's Umbrella Movement, which might be the largest Occupy movement in recent years, The Appearing Demos urges us to re-commit to democracy at a time when democracy is failing on many fronts and in different parts of the world.

The 79-day-long Hong Kong Umbrella Movement occupied major streets in the busiest parts of the city, creating tremendous inconvenience to this city famous for capitalist order and efficiency. It was also a peaceful collective effort of appearance, and it was as much a political event as a cultural one. The urge for expressing an independent cultural identity underlined both the Occupy movement and the remarkably rich cultural expressions it generated. While understanding the specificity of Hong Kong's situations, The Appearing Demos also comments on some global predicaments we are facing in the midst of neoliberalism and populism. It directs our attention from state-based sovereignty to city-based democracy, and emphasizes the importance of participation and cohabitation. The book also examines how the ideas of Hannah Arendt are useful to those happenings much beyond the political circumstances that gave rise to her theorization. The book pays particular attention to the actual intersubjective experiences during the protest. These experiences are local, fragile, and sometimes inarticulable, therefore resisting rationality and debates, but they define the fullness of any individual, and they also make politics possible. Using the Umbrella Movement as an example, this book examines the "freed" political agents who constantly take others into consideration in order to guarantee the political realm as a place without coercion and discrimination. In doing so, Pang Laikwan demonstrates how politics means neither to rule nor to be ruled, and these movements should be defined by hope, not by goals. 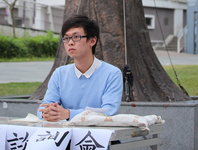 Wong Ching-Fung running for the President of CUHK Student Union, 2015

A stand on Nathan Road during the Occupy

Fig. 7. A stand on Nathan Road during Occupy, with a leaflet about Arendt’s “banality of evil” on the left and a handout reminding the occupants not to trust “leftards” on the right. (Photo by Carol Chow, provided by Carol Chow.)

Fig. 8. Umbrella Terms (top and bottom), an online glossary created for Hong Kong’s Umbrella Movement by Helen Fan and her team in 2014. (Screenshot courtesy of the author.)

Fig. 8. Umbrella Terms (top and bottom), an online glossary created for Hong Kong’s Umbrella Movement by Helen Fan and her team in 2014. (Screenshot courtesy of the author.)

Telegram conversation of Information Distribution Central Station of the Department of Cultural and Religious Studies of the Chinese University of Hong Kong, October 4, 2014

Fig. 9. Telegram conversation of the Information Distribution Central Station of the Department of Cultural and Religious Studies of the Chinese University of Hong Kong, October 4, 2014. (Screenshot courtesy of the author.)

The Hong Kong Lennon Wall just before its dismantling, December 14, 2014

One of the first stairways in Admiralty, October 2014

Fig. 14. Charter Study Area at night, October 5, 2014. The desks on the left were built on the Jersey barrier. (Photo by Yik Yueng-Man, provided by Apple Daily.)

Layers of roadblocks made up by sewerage-cover built by occupants in Long Wo Road Tunnel, October 15, 2014

Fig. 15. Layers of roadblocks made of sewer covers and built by occupants in Long Wo Road Tunnel, October 15, 2014. (Photo by Yik Yeung-Man, provided by Apple Daily.)

Fig. 18. Screenshot from That Umbrella Revolution, directed by Horatio Tsoi.

Fig. 19. Scene from One Night in Mong Kok, directed by Chan Hau-Chun.