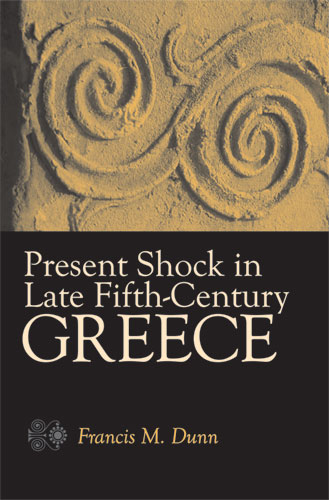 You do not have access to this book. How to get access.
Francis M. Dunn's Present Shock in Late Fifth-Century Greece examines the widespread social and cultural disorientation experienced by Athenians in a period that witnessed the revolution of 411 B.C.E. and the military misadventures in 413 and 404---a disturbance as powerful as that described in Alvin Toffler's Future Shock. The late fifth century was a time of vast cultural and intellectual change, ultimately leading to a shift away from Athenians' traditional tendency to seek authority in the past toward a greater reliance on the authority of the present. At the same time, Dunn argues, writers and thinkers not only registered the shock but explored ways to adjust to living with this new sense of uncertainty. Using literary case studies from this period, Dunn shows how narrative techniques changed to focus on depicting a world in which events were no longer wholly predetermined by the past, impressing upon readers the rewards and challenges of struggling to find their own way forward.

Although Present Shock in Late Fifth-Century Greece concentrates upon the late fifth century, this book's interdisciplinary approach will be of broad interest to scholars and students of ancient Greece, as well as anyone fascinated by the remarkably flexible human understanding of time.

Francis M. Dunn is Professor of Classics at the University of California, Santa Barbara. He is author of Tragedy's End: Closure and Innovation in Euripidean Drama (Oxford, 1996), and coeditor of Beginnings in Classical Literature (Cambridge, 1992) and Classical Closure: Reading the End in Greek and Latin Literature (Princeton, 1997).

"In this fascinating study, Francis Dunn argues that in late fifth-century Athens, life became focused on the present---that moving instant between past and future. Time itself changed: new clocks and calendars were developed, and narratives were full of suspense, accident, and uncertainty about things to come. Suddenly, future shock was now."

"In this fascinating work, Dunn examines the ways in which the Greeks constructed time and then shows how these can shed new light on various philosophical, dramatic, historical, scientific and rhetorical texts of the late fifth century. An original and most interesting study."

"Interesting, clear, and compelling, Present Shock in Late Fifth-Century Greece analyzes attitudes toward time in ancient Greece, focusing in particular on what Dunn terms 'present shock,' in which rapid cultural change undermined the authority of the past and submerged individuals in a disorienting present in late fifth-century Athens. Dunn offers smart and lucid analyses of a variety of complex texts, including pre-Socratic and sophistic philosophy, Euripidean tragedy, Thucydides, and medical texts, making an important contribution to discussions about classical Athenian thought that will be widely read and cited by scholars working on Greek cultural history and historiography."