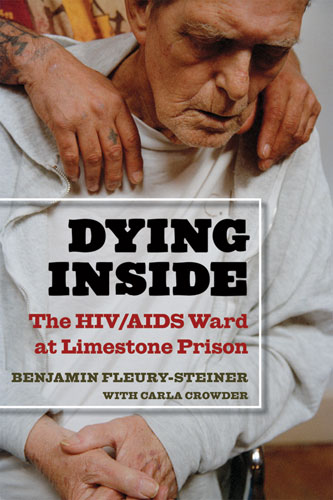 Dying Inside: The HIV/AIDS Ward at Limestone Prison

You do not have access to this book. How to get access.
"The HIV+ men incarcerated in Limestone Prison's Dorm 16 were put there to be forgotten. Not only do Benjamin Fleury-Steiner and Carla Crowder bring these men to life, Fleury-Steiner and Crowder also insist on placing these men in the middle of critical conversations about health policy, mass incarceration, and race. Dense with firsthand accounts, Dying Inside is a nimble, far-ranging and unblinking look at the cruelty inherent in our current penal policies."

"The looming prison health crisis, documented here at its extreme, is a shocking stain on American values and a clear opportunity to rethink our carceral approach to security."

"Dying Inside is a riveting account of a health crisis in a hidden prison facility."

"This fresh and original study should prick all of our consciences about the horrific consequences of the massive carceral state the United States has built over the last three decades."

---Marie Gottschalk, University of Pennsylvania, and author of The Prison and the Gallows

"An important, bold, and humanitarian book."

"Fleury-Steiner makes a compelling case that inmate health care in America's prisons and jails has reached the point of catastrophe."

"Fleury-Steiner's persuasive argument not only exposes the sins of commission and omission on prison cellblocks, but also does an excellent job of showing how these problems are the natural result of our nation's shortsighted and punitive criminal justice policy."

---Allen Hornblum, Temple University, and author of Sentenced to Science

Dying Inside brings the reader face-to-face with the nightmarish conditions inside Limestone Prison's Dorm 16---the segregated HIV ward. Here, patients chained to beds share their space with insects and vermin in the filthy, drafty rooms, and contagious diseases spread like wildfire through a population with untreated---or poorly managed at best---HIV.

While Dorm 16 is a particularly horrific human rights tragedy, it is also a symptom of a disease afflicting the entire U.S. prison system. In recent decades, prison populations have exploded as Americans made mass incarceration the solution to crime, drugs, and other social problems even as privatization of prison services, especially health care, resulted in an overcrowded, underfunded system in which the most marginalized members of our society slowly wither from what the author calls "lethal abandonment."

This eye-opening account of one prison's failed health-care standards is a wake-up call, asking us to examine how we treat our forgotten citizens and compelling us to rethink the American prison system in this increasingly punitive age.