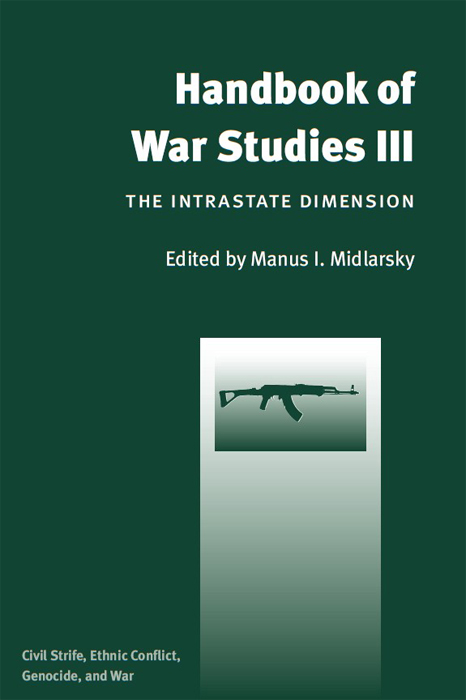 You do not have access to this book. How to get access.
"Midlarsky has done it again, another state-of-the art handbook on the most recent developments in the study of war. This volume is entirely new with a focus on internal war. It is a 'must-read' for scholars and students of conflict. Even the most knowledgeable will learn a great deal from the book."

---John A. Vasquez, Thomas B. Mackie Scholar in International Relations, University of

"Handbook of War Studies III is a tour de force. This is a compelling and comprehensive work of scholarship. Midlarsky, as with previous volumes, has assembled an 'all star' team from the interdisciplinary field of conflict processes. In response to trends in place over the last few decades, this third volume rightly focuses on the intrastate dimension of international conflict. The volume includes lucid presentations on rational choice and political psychology as alternative visions, along with convincing treatments of civil war, ethnic conflict, genocide, and related issues. This book will be required reading for anyone with an interest in conflict processes."

"This third volume of the Handbook is a very welcome addition with its focus on intrastate conflict. Scholarship on internal conflict has proliferated over the past decade, and therefore it is time to take stock of the work that has been done and to point out directions for future research. In this volume a team of leading scholars do just that as they provide trenchant assessments of what has been accomplished and what are the remaining big questions that require further research. This volume will be indispensable to students and scholars alike."

Handbook of War Studies III is a follow-up to Handbook of War Studies I (1993) and II (2000). This new volume collects original work from leading international relations scholars on domestic strife, ethnic conflict, genocide, and other timely topics. Special attention is given to civil war, which has become one of the dominant forms---if not the dominant form---of conflict in the world today.