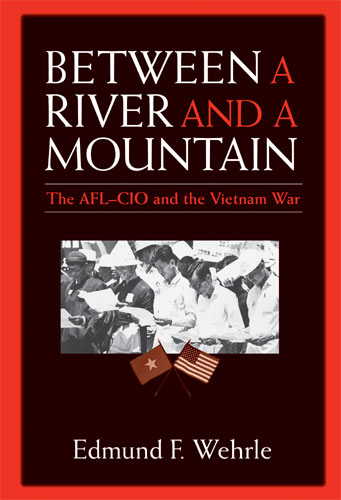 Between a River and a Mountain: The AFL-CIO and the Vietnam War

You do not have access to this book. How to get access.
Between a River and a Mountain details American labor's surprisingly complex relationship to the American war in Vietnam. Breaking from the simplistic story of "hard hat patriotism," Wehrle uses newly released archival material to demonstrate the AFL-CIO's continuing dedication to social, political, and economic reform in Vietnam. The complex, sometimes turbulent, relationship between American union leaders and their counterparts in the Vietnamese Confederation of Labor (known as the CVT) led to dangerous political compromises: the AFL-CIO eventually accepted much-needed support for their Vietnamese activities from the CIA, while the CVT's need to sustain their relationship with the Americans lured them into entanglements with a succession of corrupt Saigon governments. Although the story's endpoint--the painfully divided and weakened labor movement of the 1970s--may be familiar, Wehrle offers an entirely new understanding of the historical forces leading up to that decline, unraveling his story with considerable sophistication and narrative skill.

"Stunning in its research and sophisticated in its analysis, Between a River and a Mountain is one of the best studies we have of labor and the Vietnam War."

"Skillfully blending diplomatic and labor history, Wehrle's book is a valuable contribution to the ever-widening literature on the Vietnam War."

"Wehrle has written a compelling and original study of the AFL-CIO, the South Vietnamese labor movement and the Vietnam War."

"With this important book, Edmund Wehrle gives us the first full-fledged scholarly examination of organized labor's relationship to the Vietnam War. Based on deep research in U.S. and foreign archives, and presented in clear and graceful prose, Between a River and a Mountain adds a great deal to our understanding of how the AFL-CIO approached the war and in turn was fundamentally altered by its staunch support for Americanization. Nor is it merely an American story that Wehrle tells, for he also presents fascinating information on the Vietnamese Confederation of Labor and its sometimes-strained relations with U.S. labor."