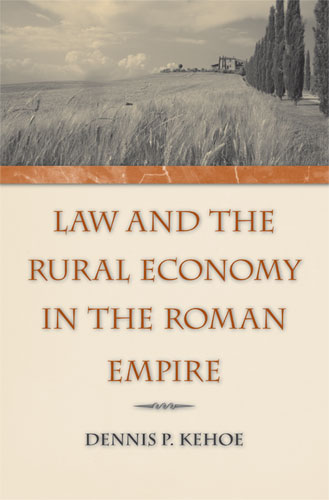 Law and the Rural Economy in the Roman Empire

You do not have access to this book. How to get access.
The economy of the Roman Empire was predominantly agrarian: Roman landowners, agricultural laborers, and small tenant farmers were highly dependent upon one another for assuring stability. By examining the property rights established by the Roman government, in particular the laws concerning land tenure and the contractual relationships between wealthy landowners and the tenant farmers to whom they leased their land, Dennis P. Kehoe is able to demonstrate how the state fostered economic development and who benefited the most. In this bold application of economic theory, Kehoe explores the relationship between Roman private law and the development of the Roman economy during a crucial period of the Roman Empire, from the second to the fourth century C.E. Kehoe is able to use the laws concerning land tenure, and the Roman government's enforcement of those laws, as a window through which to develop a more comprehensive view of the Roman economy. With its innovative application of the methodologies of law and economics and the New Institutional Economics Law and the Rural Economy in the Roman Empire is a groundbreaking addition to the study of the Roman economy.

Dennis P. Kehoe is Professor of Classical Studies at Tulane University. He is the author of several books, including Investment, Profit, and Tenancy: The Jurists and the Roman Agrarian Economy(University of Michigan Press, 1997).

"Kehoe brings his deep expertise in Roman land tenure systems and his broad knowledge of the methodologies of New Institutional Economics to bear on questions of fundamental importance regarding the relationship of Roman law and society. Was governmental policy on agriculture designed to benefit large landowners or small farmers? What impact did it have on the rural economy? The fascinating answers Kehoe provides in this pathbreaking work should occasion a major reassessment of such problems by social and legal historians."

---Thomas McGinn, Department of Classical Studies at Vanderbilt University, and author of The Economy of Prostitution in the Roman World: A Study of Social History and the Brothel and Prostitution, Sexuality, and the Law in Ancient Rome

"A ground-breaking study using the principles of New Institutional Economics to analyze the impact of legal policy in balancing the interests of Roman tenant-farmers and landowners in the 2-4 centuries C.E. Kehoe's book will be essential reading for historians of the Roman Empire, demonstrating how the government overcame challenges and contradictions as it sought to regulate this enormous sector of the economy."

"In Law and the Rural Economy, Kehoe brings to life the workings of the ancient economy and the Roman legal system. By analyzing interactions between the imperial government, landlords, and tenant farmers in provinces across the Empire, Kehoe opens insights into imperial economic policy. He handles a variety of challenging sources with mastery and wit, and his knowledge of scholarship is extensive and thorough, covering ancient history, textual problems in the sources, legal history and, perhaps most impressively, the modern fields of economic theory and 'law and economics.' Kehoe's innovative and sophisticated methodology sets his work apart. The book will make an important contribution to our understanding of access to the law and the effectiveness of the legal system, important topics for scholars of law, ancient and modern."