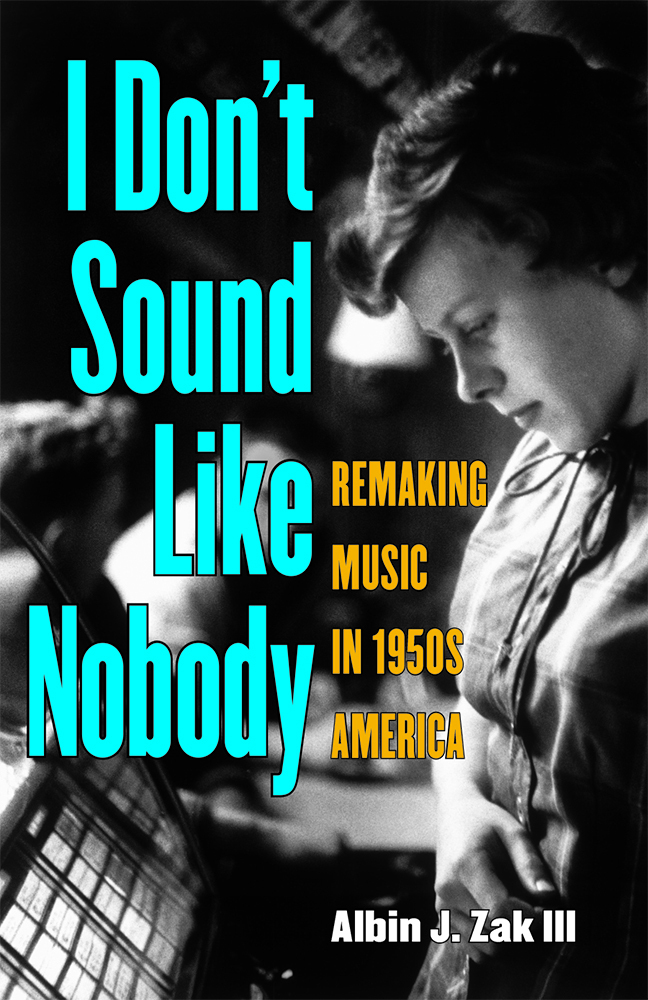 I Don't Sound Like Nobody: Remaking Music in 1950s America

Albin J. Zak III 2010
"In Albin J. Zak III's highly original study, phonograph records are not just the medium for disseminating songs but musical works unto themselves. Fashioned from a mix of copyright law, recording studios and techniques, the talent of musicians and disc jockeys, the ingenuity and avarice of producers, and the appetites of record buyers, the all-powerful marketplace Zak describes is an unruly zone where music of, by, and for the people is made and anointed."

"Wrestling clarity from the exuberant chaos of early rock 'n' roll, Albin Zak's I Don't Sound Like Nobody redefines our understanding of the record in the shaping of the post–World War II soundscape. Zak tracks the story which extends from Bing Crosby and Frank Sinatra through Elvis and Buddy Holly to the Beatles and Bob Dylan with excursions into dozens of lesser known, but crucial, players in a game with few established rules. A crucial addition to the bookshelf."

---Craig Werner, author of A Change Is Gonna Come: Music, Race & the Soul of America

"I Don't Sound Like Nobody is a superb account of the transformation of American popular music in the 1950s. Albin Zak insightfully explores what recording actually means in terms of the process of making and consuming music. His discussion of the legal, aesthetic, and industrial ramifications of changes in the recording process over the course of the 1950s will make popular music scholars and record collectors reconsider what they think they know about the period."

"Informative, original, and entertaining. Through a narrative that is not only enlightening but also compelling, I Don't Sound Like Nobody probes the sources and mechanisms of change within post-war American popular music, shedding a cultural and historical light on the convergence of musical idioms that created '50s rock and roll."

"From the birth of the record industry through the legacy of Presley, the development of rock and roll, and the Beatles 'stunning arrival on the world's stage,' Albin Zak takes us on a journey of exceptional scholarship. The breadth of coverage and deep examination of recordings and repertoire reveal the author's reverence and sensitivity to the many dimensions and origins of this complex musical soundscape."

---William Moylan, author of Understanding and Crafting the Mix: The Art of Recording

The 1950s marked a radical transformation in American popular music as the nation drifted away from its love affair with big band swing to embrace the unschooled and unruly new sounds of rock 'n' roll.

The sudden flood of records from the margins of the music industry left impressions on the pop soundscape that would eventually reshape long-established listening habits and expectations, as well as conventions of songwriting, performance, and recording. When Elvis Presley claimed, "I don't sound like nobody," a year before he made his first commercial record, he unwittingly articulated the era's musical Zeitgeist.

The central story line of I Don't Sound Like Nobody is change itself. The book's characters include not just performers but engineers, producers, songwriters, label owners, radio personalities, and fans---all of them key players in the decade's musical transformation.

Written in engaging, accessible prose, Albin Zak's I Don't Sound Like Nobody approaches musical and historical issues of the 1950s through the lens of recordings and fashions a compelling story of the birth of a new musical language. The book belongs on the shelf of every modern music aficionado and every scholar of rock 'n' roll.

Albin J. Zak III is Professor of Music at the University at Albany, State University of New York. He is the editor of The Velvet Underground Companion and the author of The Poetics of Rock: Cutting Tracks, Making Records, a groundbreaking study of rock music production. Zak is also a record producer, songwriter, singer, and guitarist.