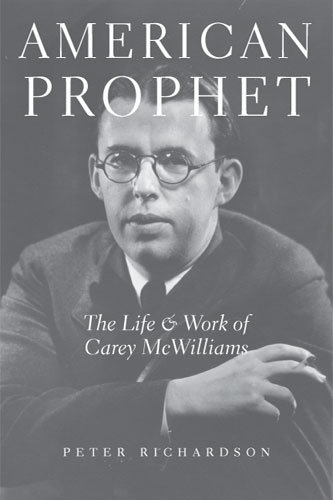 American Prophet: The Life and Work of Carey McWilliams

You do not have access to this book. How to get access.
A long-overdue book on the brilliant life and career of one of our greatest public intellectuals, American Prophet will introduce Carey McWilliams to a new generation of readers.

American Prophet illustrates the arc of McWilliams's life and career from his early literary journalism through his legal and political activism, his stint in state government, and his two decades as editor of the Nation. This book makes the case for McWilliams's place in the Olympian realm of our most influential and prescient political writers.

Peter Richardson is the editorial director at PoliPointPress in Sausalito, California. He is the author or editor of numerous works on language, literature, and California public policy. He holds a Ph.D. in English from the University of California Berkeley.