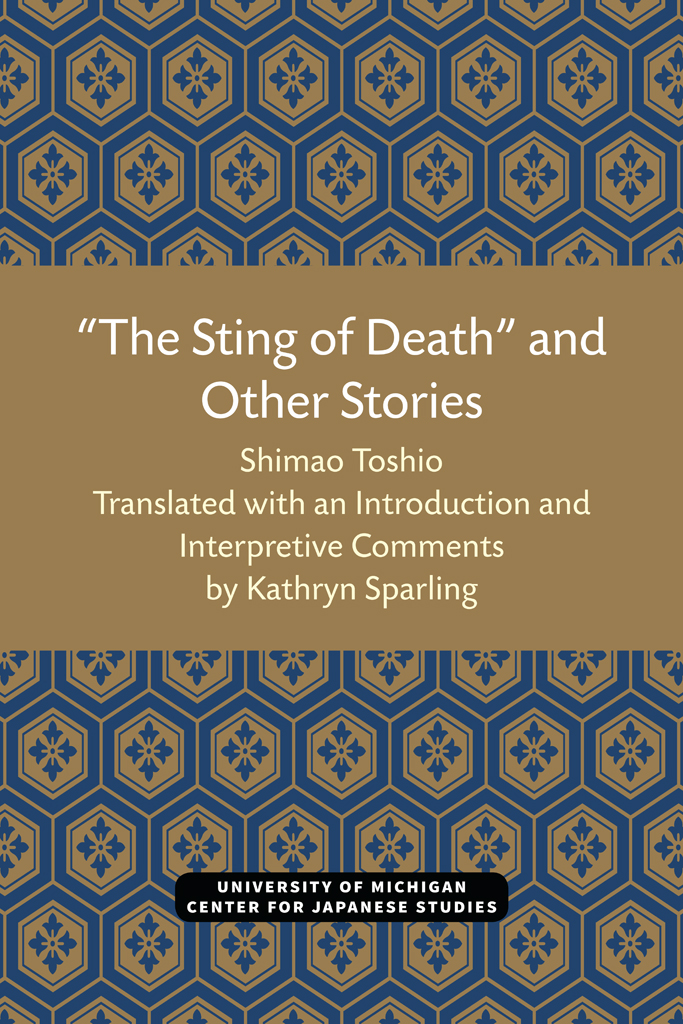 "The Sting of Death" and Other Stories

Shimao Toshio; Translated with an Introduction and Interpretive Comments by Kathryn Sparling 1985

Open Access
Until a recent "boom," Shimao Toshio, writer of short fiction, critic, and essayist, was not widely known, even in Japan. He has never won the Akutagawa or the Naoki Prize, and none of his works had previously appeared in English translation. He is less well known than other writers (Yasuoka Shotaro, Kojima Nobuo, and Shono Junzo) with whom he has associated and whose works have been liberally translated into English. Yet, there are those who consider him to be one of the best contemporary writers in Japan.

This volume by no means exhausts the scope of Shimao's fiction. There are no stories here, for instance, about childhood or student life, and none of his many travel stories. Some of his most famous stories-- "When we Never Left Port," for example--have not been included. But the stories presented here do offer a considerable variety of style, from the pristine storybook language of "The Farthest Edge of the Islands," to the young intellectual's jargon of "Everyday Life in a Dream," to the visionary, hysterical, occasionally ritualistic prose of the "sick wife" stories, to the sober, difficult, almost ponderous narration of "This Time That Summer." Shimao's approach to his material varies as well. "Everyday Life in a Dream" is the only representative here of a large number of stories usually called surrealistic by the critics, stories whose plots progress by the logic of dreams. The individual experience of real life are lived through a combination of conscious and unconscious perception. These stories are the least approachable and the least charming to the casual reader, but they serve, among other things, to highlight patterns in the more realistic fiction. "The Farthest Edge of the Islands" is a symbolic heightening of reality in another way, a romantic fairy tale beginning at the extremity of experience, at the farthest edge of the world. The other stories are presented as precise, close chronicles of reality by a participant in that reality whose attention never waivers and who never allows himself to avert his eyes from a world that he sees as his responsibility and in a sense his fault. All but the first story, "The Farthest Edge of the Islands," which is in third-person narration, are told in the first person by the character who plays Shimao's role in the life that inspired the fiction.

93 views since May 14, 2020
x This site requires cookies to function correctly.