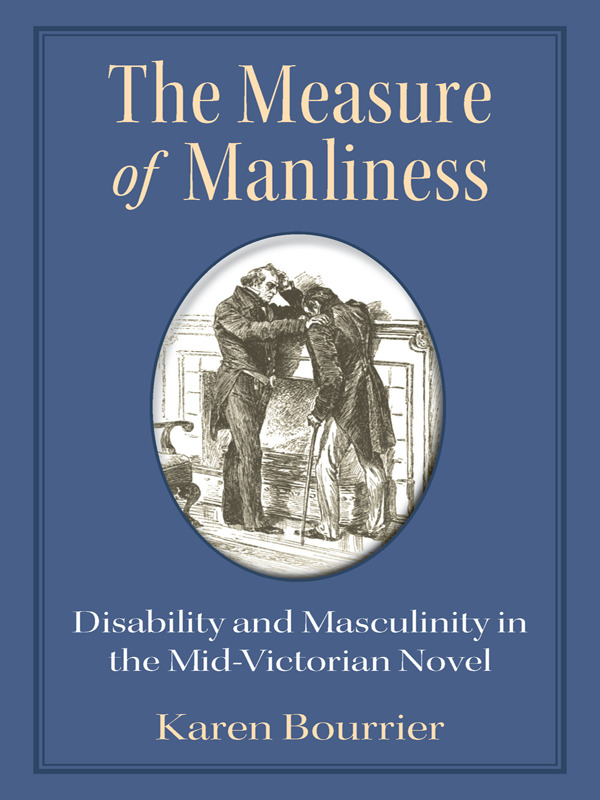 The Measure of Manliness: Disability and Masculinity in the Mid-Victorian Novel

Karen Bourrier 2015
The Measure of Manliness is among the first books to focus on representations of disability in Victorian literature, showing that far from being marginalized or pathologized, disability was central to the narrative form of the mid-century novel. Mid-Victorian novels evidenced a proliferation of male characters with disabilities, a phenomenon that author Karen Bourrier sees as a response to the rise of a new Victorian culture of industry and vitality, and its corollary emphasis on a hardy, active manhood. The figure of the voluble, weak man was a necessary narrative complement to the silent, strong man. The disabled male embodied traditionally feminine virtues, softening the taciturn strong man, and eliciting emotional depths from his seemingly coarse muscular frame. Yet, the weak man was able to follow the strong man where female characters could not, to all-male arenas such as the warehouse and the public school.

The analysis yokes together historical and narrative concerns, showing how developments in nineteenth-century masculinity led to a formal innovation in literature: the focalization or narration of the novel through the perspective of a weak or disabled man. The Measure of Manliness charts new territory in showing how feeling and loquacious bodies were increasingly seen as sick bodies throughout the nineteenth century. The book will appeal to those interested in disability studies, gender and masculinity studies, the theorization of sympathy and affect, the recovery of women's writing and popular fiction, the history of medicine and technology, and queer theory.