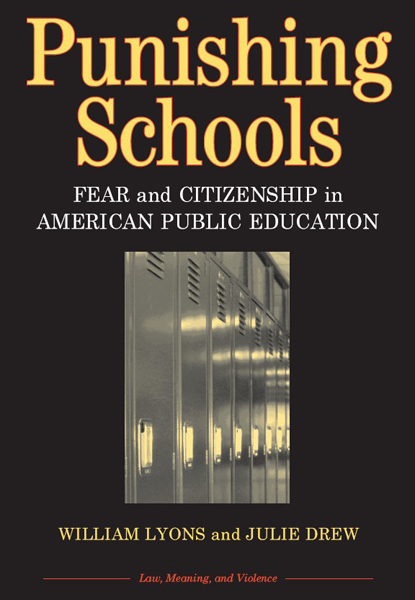 You do not have access to this book. How to get access.
In a society increasingly dominated by zero-tolerance thinking, Punishing Schools argues that our educational system has become both the subject of legislative punishment and an instrument for the punishment of children. William Lyons and Julie Drew analyze the connections between state sanctions against our schools (the diversion of funding to charter schools, imposition of unfunded mandates, and enforcement of dubious forms of teacher accountability) and the schools' own infliction of punitive measures on their students-a vicious cycle that creates fear and encourages the development of passive and dependent citizens.

"Public schools in the United States are no longer viewed as a public good. On the contrary, they are increasingly modeled after prisons, and students similarly have come to mirror the suspicions and fears attributed to prisoners. Punishing Schools is one of the most insightful, thoughtful, and liberating books I have read on what it means to understand, critically engage, and transform the present status and state of schools from objects of fear and disdain to institutions that value young people, teachers, and administrators as part of a broader vision of social justice, freedom, and equality. William Lyons and Julie Drew have done their homework and provide all the necessary elements for understanding and defending schools as public spheres that are foundational to a democracy. This book should be required reading for every student, teacher, parent, and concerned citizen in the United States. In the end, this book is not just about saving schools, it is also about saving democracy and offering young people a future that matters."

"This is an important book . . . a distinctive contribution. The authors move back and forth convincingly between the micropolitics of school discipline and the 'politics writ large' of the liberal left and the utopian right. The result is an expansive, idealistic, and well-grounded book in the spirit of the very best of social control literature."

William Lyons is Director of Center for Conflict Management and Associate Professor of Political Science, University of Akron.

Julie Drew is Associate Professor of English, University of Akron.