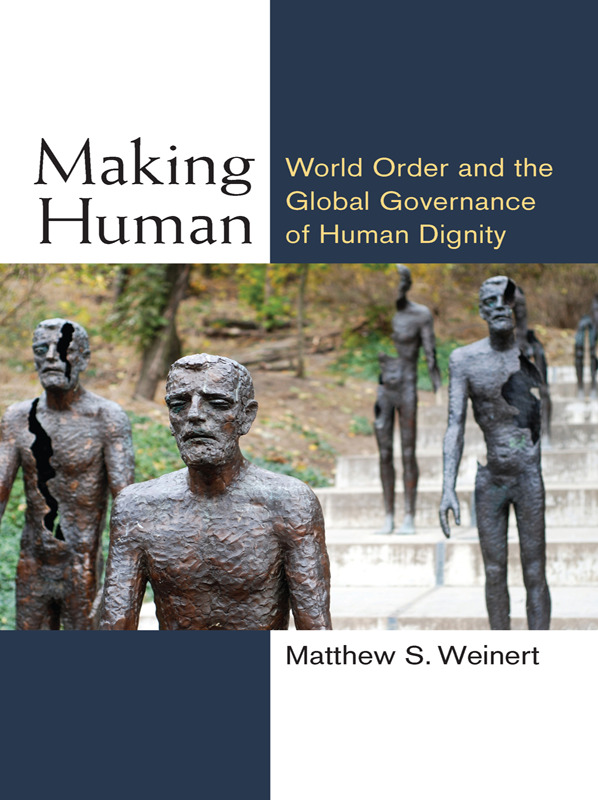 Matthew S. Weinert 2015
Differences between human beings have long been used to justify a range of degrading, exclusionary, and murderous practices that strip people of their humanity and dignity. While considerable scholarship has been devoted to such dehumanization, Matthew S. Weinert asks how we might conceive its reverse—humanization, or what it means to "make human."

Weinert proposes an account of making human centered on five mechanisms: reflection, recognition, resistance, replication of dominant mores, and responsibility. Examining cases such as the UN Security Council's engagements with crises and the International Court of Justice's grappling with Kosovo's unilateral declaration of independence, he illustrates the distinct and contingent ways these mechanisms have been deployed. Theoretically, the cases evince a complex, evolving relationship between state-centric and human-centric views of society, ultimately revealing the normative potentialities of both.

Though the case studies concern specific human relations issues on an international level, Weinert argues in favor of starting from the shared problem of being human and of living in a world in which the humanity of countless groups has been demeaned or denied. Working outward from that point, he proposes, we obtain a more pragmatically grounded understanding of the social construction of the human being.