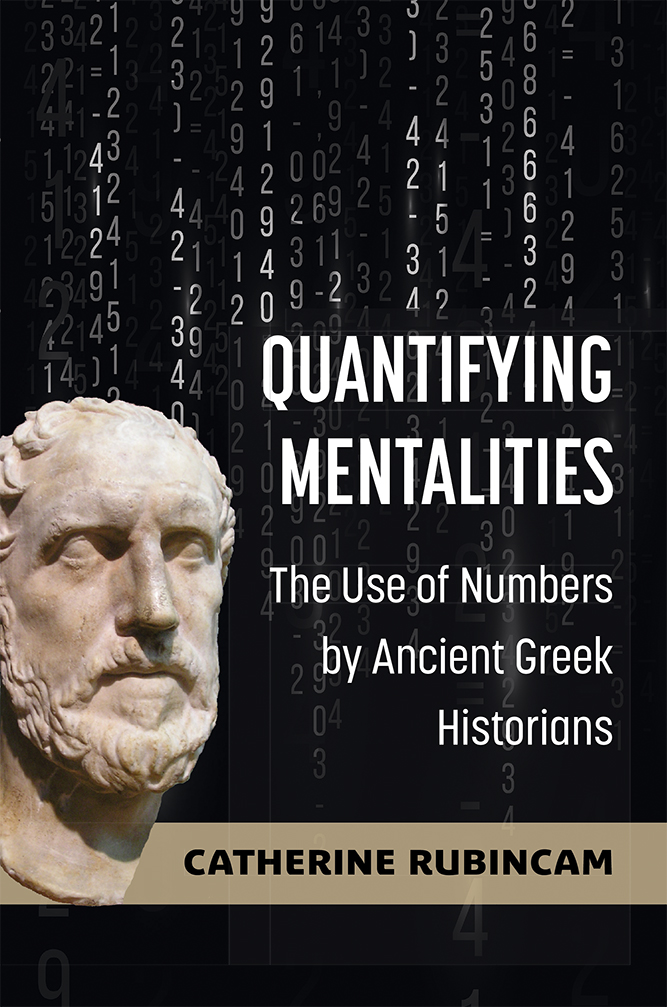 Quantifying Mentalities: The Use of Numbers by Ancient Greek Historians

You do not have access to this book. How to get access.
As 21st-century citizens of developed countries, we are constantly bombarded by numbers in every aspect of our lives. Almost automatically, we learn to interpret how numbers are used in our language, what magnitude of numbers we expect to hear in particular contexts, how people in our community express degrees of confidence in the reliability of any particular number, etc. Context of this kind is lacking when we read a historical narrative composed in an ancient language, from a world vastly different from ours.  In Quantifying Mentalities, Catherine Rubincam helps overcome this barrier to our accurate understanding of the numbers in the works of five major ancient Greek historians by providing a standard against which their credibility can be more accurately judged.

This systematic, quantified study is based on the compilation of statistics concerning a standard constellation of aspects of all the numbers in the historical works of the five earliest wholly or at least substantially surviving ancient Greek historians:  Herodotus, Thucydides, Xenophon (Anabasis and Hellenica), Polybius, and Diodorus Siculus. Such a comprehensive study has not been attempted before.  For scholars reading and writing about the history of ancient Greece the volume offers a tool for interpreting the numbers in these ancient texts with more sensitivity to the world in which they were written. Standard aspects of number use captured by the coding system are:  the different types of number (cardinals, ordinals, compounds, and non-explicit but definite numbers); the subject category to which each number belongs (Time, Distance-Size, Military, Population, Money, and Miscellaneous); and the types of any qualifications attached to it (Approximating, Comparative, Alternative, and Emphatic). The statistics also facilitate comparisons of every aspect of number use between authors and texts, enabling the delineation of a numeric profile for each one. This allows us to read these texts with a greater sensitivity to how they might have sounded to the author and his original readers, thus providing a firmer foundation for reconstructing or interpreting ancient Greek history.