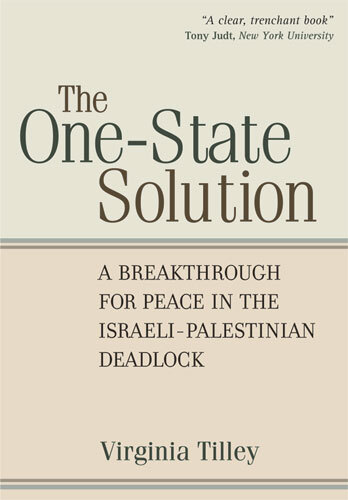 The One-State Solution: A Breakthrough for Peace in the Israeli-Palestinian Deadlock

Virginia Tilley 2005
"A clear, trenchant book on a topic of enormous importance... Overall this is a courageous plunge

into boiling waters. If it helps propel forward a debate that has hardly begun in this country it will

have performed a signal scholarly and political function."

The One-State Solution demonstrates that Israeli settlements have already encroached on the occupied territory of the West Bank and Gaza Strip to the extent that any Palestinian state in those areas is unviable. It reveals the irreversible impact of Israel's settlement grid by summarizing its physical, demographic, financial, and political dimensions. Virginia Tilley explains why we should assume that this grid will not be withdrawn—or its expansion reversed—by reviewing the

role of the key political actors: the Israeli government, the United States, the Arab states, and the European Union. Finally, the book addresses the daunting obstacles to a one-state solution—including major revision of the Zionist dream but also Palestinian and other regional resistance—and offers some ideas about how those obstacles might be addressed.

Virginia Tilley is Chief Research Specialist in the Democracy and Governance Division of the Human Research Council in Cape Town, South Africa.