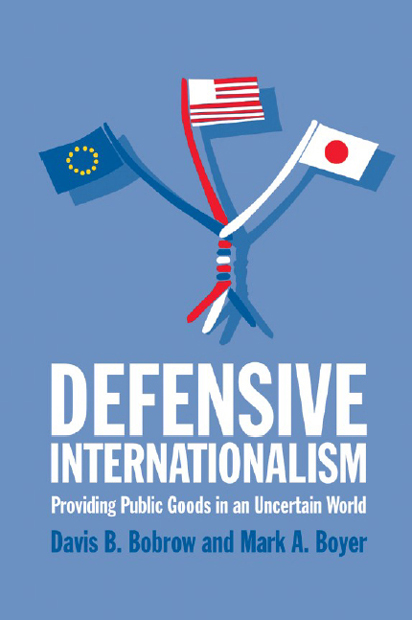 Davis B. Bobrow and Mark A. Boyer 2005
"The authors' carefully crafted analysis will influence thought and the policy debate on the tradeoff between unilateralism and multilateralism for decades to come."

In this pathbreaking study, authors Davis B. Bobrow and Mark A. Boyer argue for "muted optimism" about the future of international cooperation. Leaders of a growing movement that integrates constructivism into traditional international studies concepts and methods, Bobrow and Boyer analyze four key international issues: development cooperation, debt management, peacekeeping operations, and environmental affairs. Their approach integrates elements of public goods theory, identity theory, new institutionalism, and rational choice. Defensive Internationalism is a well-written, creative and coherent synthesis of ideas that have up to now been considered irreconcilable. It is appropriate for upper-level undergraduate and graduate students in international relations, conflict studies, and political economy, and promises to become a foundational work in its field.

Davis B. Bobrow is Professor of Public and International Affairs and Political Science at the University of Pittsburgh.

Mark A. Boyer is Professor of Political Science at the University of Connecticut.