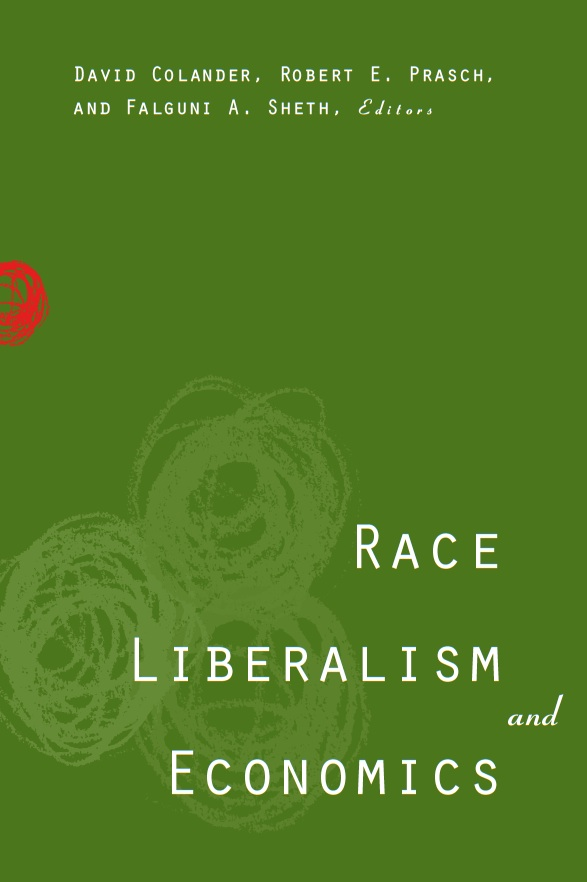 You do not have access to this book. How to get access.
Noneconomists often think that economists' approach to race is almost exclusively one of laissez-faire. Racism, Liberalism, and Economics argues that economists' ideas are more complicated. The book considers economists' support of markets in relation to the challenge of race and race relations and argues that their support of laissez-faire has traditionally been based upon a broader philosophical foundation of liberalism and history: what markets have and have not achieved in the past, and how that past relates to the future. The book discusses the concepts of liberalism and racism, the history and use of these terms, and how that history relates to policy issues. It argues that liberalism is consistent with a wide variety of policies and that the broader philosophical issues are central in choosing policies.

The contributors show how the evolution of racist ideas has been a subtle process that is woven into larger movements in the development of scientific thought; economic thinking is embedded in a larger social milieu. Previous discussions of policies toward race have been constrained by that social milieu, and, since World War II, have largely focused on ending legislated and state-sanctioned discrimination. In the past decade, the broader policy debate has moved on to questions about the existence and relative importance of intangible sources of inequality, including market structure, information asymmetries, cumulative processes, and cultural and/or social capital. This book is a product of, and a contribution to, this modern discussion. It is uniquely transdisciplinary, with contributions by and discussions among economists, philosophers, anthropologists, and literature scholars.

The volume first examines the early history of work on race by economists and social scientists more generally. It continues by surveying American economists on race and featuring contributions that embody more modern approaches to race within economics. Finally it explores several important policy issues that follow from the discussion.

". . . adds new insights that contribute significantly to the debate on racial economic inequality in the U.S. The differing opinions of the contributors provide the broad perspective needed to examine this extremely complex issue."

"There is an immense economic literature on racial discrimination, employing a variety of models and decomposition methods. This volume makes a unique contribution by focusing on the philosophical assumptions at the root of this analysis and by presenting many sides of the very vigorous debate surrounding these controversial issues."

"By focusing upon the progress of analytical technique, historians of economic thought have grossly neglected the symbiotic relation of economics to public policy and ideology. This collection of essays offers a most welcome breach of disciplinary apartheid. Seizing upon recent research in the almost forgotten writings about race of Classical economists and their contemporaries, it relates nineteenth-century ideas to current debates about economic discrimination and other manifestations of racism. As the writing is both learned and lively, the book should appeal both to the generally educated reader and to teachers of courses in multiculturalism."