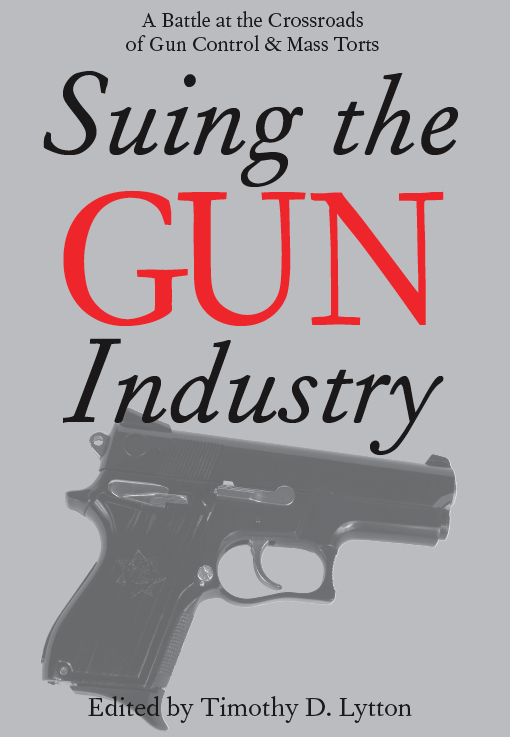 Suing the Gun Industry: A Battle at the Crossroads of Gun Control and Mass Torts

You do not have access to this book. How to get access.
"Mass tort litigation against the gun industry, with its practical weaknesses, successes, and goals, provides the framework for this collection of thoughtful essays by leading social scientists, lawyers, and academics. . . . These informed analyses reveal the complexities that make the debate so difficult to resolve. . . . Suing the Gun Industry masterfully reveals the many details contributing to the intractability of the gun debate."

"Second Amendment advocate or gun-control fanatic, all Americans who care about freedom need to read Suing the Gun Industry."

"The source for anyone interested in a balanced analysis of the lawsuits against the gun industry."

"Highly readable, comprehensive, well-balanced. It contains everything you need to know, and on all sides, about the wave of lawsuits against U.S. gun manufacturers."

-James B. Jacobs, Warren E. Burger Professor of Law and author of Can Gun Control Work?

"In Suing the Gun Industry, Timothy Lytton has assembled some of the leading scholars and advocates, both pro and con, to analyze this fascinating effort to circumvent the well-known political obstacles to more effective gun control. This fine book offers a briefing on both the substance and the legal process of this wave of lawsuits, together with a better understanding of the future prospects for this type of litigation vis-à-vis other industries."

"An interesting collection, generally representing the center of the gun-control debate, with considerable variation in focus, objectivity, and political realism."

Gun litigation deserves a closer look amid the lessons learned from decades of legal action against the makers of asbestos, Agent Orange, silicone breast implants, and tobacco products, among others.

Suing the Gun Industry collects the diverse and often conflicting opinions of an outstanding cast of specialists in law, public health, public policy, and criminology and distills them into a complete picture of the intricacies of gun litigation and its repercussions for gun control.

Using multiple perspectives, Suing the Gun Industry scrutinizes legal action against the gun industry. Such a broad approach highlights the role of this litigation within two larger controversies: one over government efforts to reduce gun violence, and the other over the use of mass torts to regulate unpopular industries.

Readers will find Suing the Gun Industry a timely and accessible picture of these complex and controversial issues.