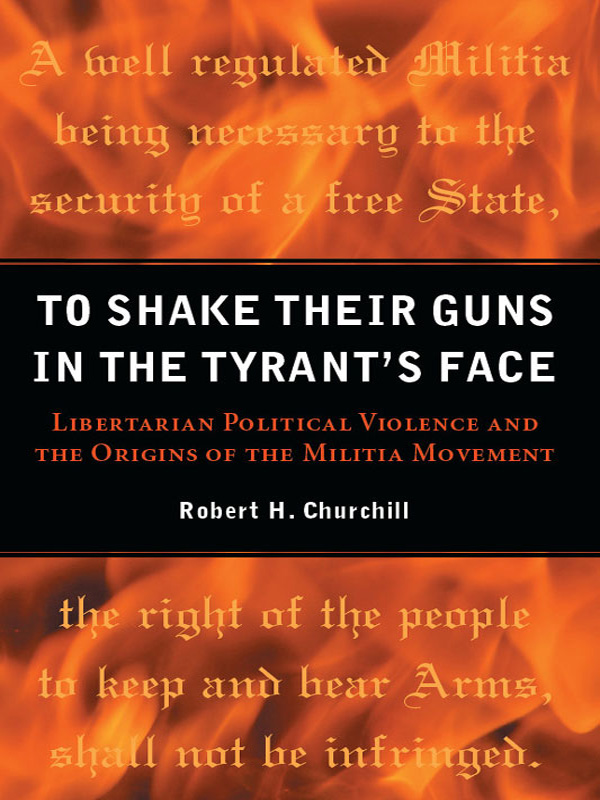 To Shake Their Guns in the Tyrant's Face: Libertarian Political Violence and the Origins of the Militia Movement

You do not have access to this book. How to get access.
After the bombings of Oklahoma City in 1995, most Americans were shocked to discover that tens of thousands of their fellow citizens had banded together in homegrown militias. Within the next few years, numerous studies and media reports appeared revealing the unseen world of the American militia movement, a loose alliance of groups with widely divergent views. Not surprisingly, it was the movement's most extreme voices that attracted the lion's share of attention.

In reality the militia movement was neither as irrational nor as new as it was portrayed in the press, Robert Churchill writes. What bound the movement together was the shared belief that citizens have a right, even a duty, to take up arms against wanton exercise of unconstitutional power by the federal government. Many were motivated to join the movement by what they saw as a rise in state violence, illustrated by the government assaults at Ruby Ridge, Idaho in 1992, and Waco, Texas in 1993. It was this perception and the determination to deter future state violence, Churchill argues, that played the greatest role in the growth of the American militia movement.

Churchill uses three case studies to illustrate the origin of some of the core values of the modern militia movement: Fries' Rebellion in Pennsylvania at the end of the eighteenth century, the Sons of Liberty Conspiracy in Civil War-era Indiana and Illinois, and the Black Legion in Michigan and Ohio during the Depression. Building on extensive interviews with militia members, the author places the contemporary militia movement in the context of these earlier insurrectionary movements that, animated by a libertarian interpretation of the American Revolution, used force to resist the authority of the federal government.

A historian of early America, Robert H. Churchill has published numerous articles on  American political violence and the right to keep and bear arms. He is currently Associate Professor of History at the University of Hartford.

"This book is about how we think about the past, how cultural memories are formed and evolve, and how these memories then come to impact current understandings of issues. Churchill provides an enlightening analysis of the ideology, structure, and purpose of the militia movement. Where much scholarship has categorized it as a cohesive, single movement, Churchill begins the process of unraveling its complexity."

"To Shake Their Guns in the Tyrant's Face addresses an area---the relationship of American political violence to American ideology---that is of growing importance and that is commanding an ever increasing audience, and it does so in a way like nothing else in the field."