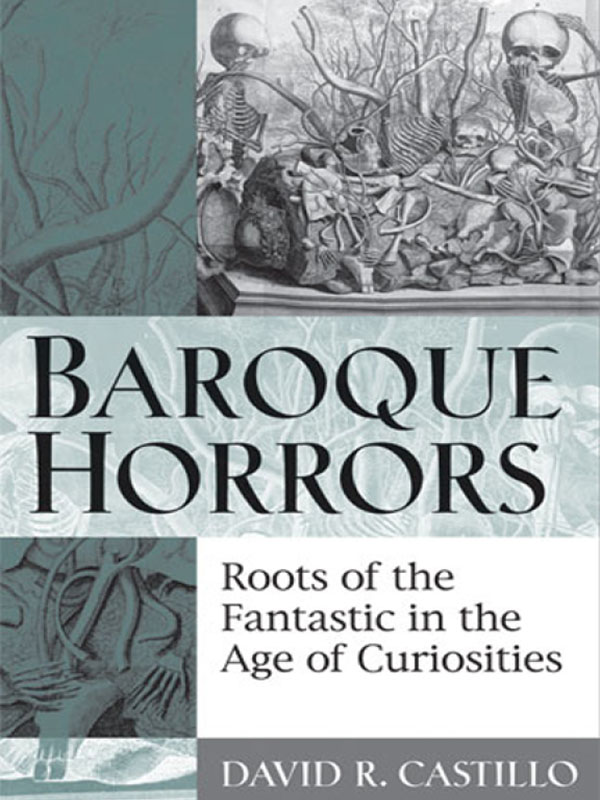 Baroque Horrors: Roots of the Fantastic in the Age of Curiosities

You do not have access to this book. How to get access.
"David Castillo takes us on a tour of some horrific materials that have rarely been considered together. He sheds a fantastical new light on the baroque."

"Baroque Horrors is a textual archeologist's dream, scavenged from obscure chronicles, manuals, minor histories, and lesser-known works of major artists. Castillo finds tales of mutilation, mutation, monstrosity, murder, and mayhem, and delivers them to us with an inimitable flair for the sensational that nonetheless rejects sensationalism because it remains so grounded in historical fact."

"Baroque Horrors is a major contribution to baroque ideology, as well as an exploration of the grotesque, the horrible, the fantastic. Castillo organizes his monograph around the motif of curiosity, refuting the belief that Spain is a country incapable of organized scientific inquiry."

Baroque Horrors turns the current cultural and political conversation from the familiar narrative patterns and self-justifying allegories of abjection to a dialogue on the history of our modern fears and their monstrous offspring. When life and death are severed from nature and history, "reality" and "authenticity" may be experienced as spectator sports and staged attractions, as in the "real lives" captured by reality TV and the "authentic cadavers" displayed around the world in the Body Worlds exhibitions. Rather than thinking of virtual reality and staged authenticity as recent developments of the postmodern age, Castillo looks back to the Spanish baroque period in search for the roots of the commodification of nature and the horror vacui that accompanies it. Aimed at specialists, students, and readers of early modern literature and culture in the Spanish and Anglophone traditions as well as anyone interested in horror fantasy, Baroque Horrors offers new ways to rethink broad questions of intellectual and political history and relate them to the modern age.

David Castillo is Associate Professor and Director of Graduate Studies in the Department of Romance Languages and Literatures at the University at Buffalo, SUNY.