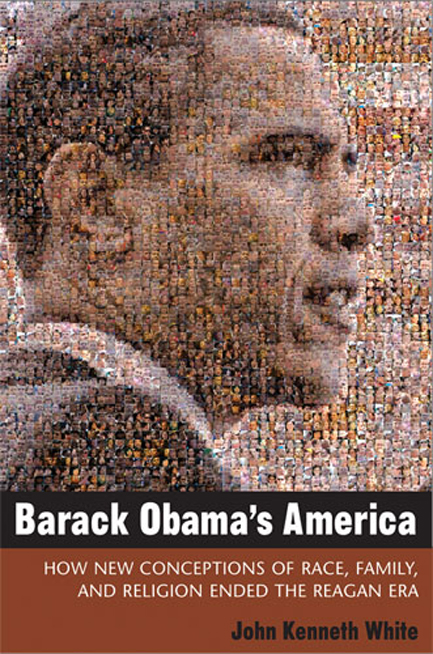 "This delightfully written and accessible book is the best available account of the changes in culture, society, and politics that have given us Barack Obama's America."

"From one of the nation's foremost experts on how values shape our politics, a clear and compelling account of the dramatic shifts in social attitudes that are transforming American political culture. White's masterful blend of narrative and data illuminates the arc of electoral history from Reagan to Obama, making a powerful case for why we are entering a new progressive political era."

"John Kenneth White is bold. He asks the big questions . . . Who are we? What do we claim to believe? How do we actually live? What are our politics? John Kenneth White writes compellingly about religion and the role it played in making Barack Obama president. White's keen insight into America's many faiths clarifies why Barack Obama succeeded against all odds. It is a fascinating description of religion and politics in twenty-first-century America---a must-read."

"In Barack Obama's America, John Kenneth White has written the political equivalent of Baedeker or Michelin, the definitive guide to and through the new, uncharted political landscape of our world. White captures and explains what America means---and what it means to be an American---in the twenty-first century."

"John White has always caught important trends in American politics that others missed. With his shrewd analysis of why Barack Obama won, he's done it again."

The election of Barack Obama to the presidency marks a conclusive end to the Reagan era, writes John Kenneth White in Barack Obama's America. Reagan symbolized a 1950s and 1960s America, largely white and suburban, with married couples and kids at home, who attended church more often than not.

Obama's election marks a new era, the author writes. Whites will be a minority by 2042. Marriage is at an all-time low. Cohabitation has increased from a half-million couples in 1960 to more than 5 million in 2000 to even more this year. Gay marriages and civil unions are redefining what it means to be a family. And organized religions are suffering, even as Americans continue to think of themselves as a religious people. Obama's inauguration was a defining moment in the political destiny of this country, based largely on demographic shifts, as described in Barack Obama's America.

John Kenneth White is Professor of Politics at the Catholic University of America in Washington, D.C.

Cover image: "Out of many, we are one: Dare to Hope: Faces from 2008 Obama Rallies" by Anne C. Savage, view and buy full image at http://revolutionaryviews.com/obama\_poster.html.