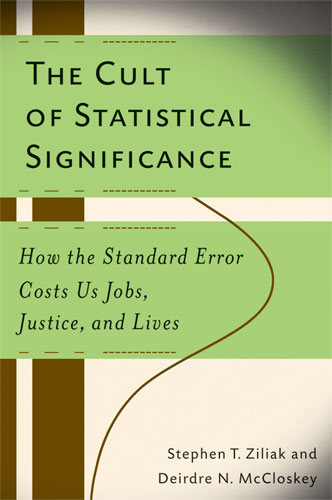 The Cult of Statistical Significance: How the Standard Error Costs Us Jobs, Justice, and Lives

You do not have access to this book. How to get access.
"McCloskey and Ziliak have been pushing this very elementary, very correct, very important argument through several articles over several years and for reasons I cannot fathom it is still resisted. If it takes a book to get it across, I hope this book will do it. It ought to."

"With humor, insight, piercing logic and a nod to history, Ziliak and McCloskey show how economists—and other scientists—suffer from a mass delusion about statistical analysis. The quest for statistical significance that pervades science today is a deeply flawed substitute for thoughtful analysis. . . . Yet few participants in the scientific bureaucracy have been willing to admit what Ziliak and McCloskey make clear: the emperor has no clothes."

The Cult of Statistical Significance shows, field by field, how "statistical significance," a technique that dominates many sciences, has been a huge mistake. The authors find that researchers in a broad spectrum of fields, from agronomy to zoology, employ "testing" that doesn't test and "estimating" that doesn't estimate. The facts will startle the outside reader: how could a group of brilliant scientists wander so far from scientific magnitudes? This study will encourage scientists who want to know how to get the statistical sciences back on track and fulfill their quantitative promise. The book shows for the first time how wide the disaster is, and how bad for science, and it traces the problem to its historical, sociological, and philosophical roots.

Stephen T. Ziliak is the author or editor of many articles and two books. He currently lives in Chicago, where he is Professor of Economics at Roosevelt University. Deirdre N. McCloskey, Distinguished Professor of Economics, History, English, and Communication at the University of Illinois at Chicago, is the author of twenty books and three hundred scholarly articles. She has held Guggenheim and National Humanities Fellowships. She is best known for How to Be Human* Though an Economist (University of Michigan Press, 2000) and her most recent book, The Bourgeois Virtues: Ethics for an Age of Commerce (2006).