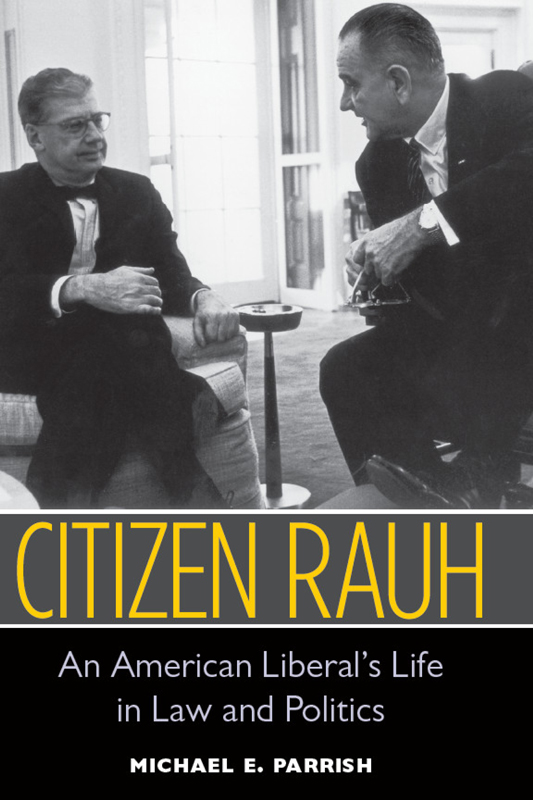 Citizen Rauh: An American Liberal's Life in Law and Politics

You do not have access to this book. How to get access.
"Joe Rauh was the type of lawyer who comes along maybe once in a generation---talented, politically astute, effective, and stubbornly devoted to principles, the type of person who not only could but did make a difference. He deserves a biography that explores not only his persona, but the America in which he lived and worked, and how he made a difference to so many people. Michael Parrish has given us just such a book, an exceedingly fine, well-written story that will make clear to another generation not only who Joe Rauh was, but why we as a nation will always need someone like him."

"Michael Parrish has captured the life of this great civil libertarian in splendid fashion. His biography of this energetic New Deal liberal weaves effortlessly between public and private, friend and foe, victory and defeat. With Parrish as a sure guide, Citizen Rauh transports the reader through an American history that begins with Sacco and Vanzetti and ends as he battles CIA skullduggery in the 1980s. This biography should be on your shelf and in your heart."

---Nelson Lichtenstein, MacArthur Foundation Professor of History and Director of the Center for the Study of Work, Labor, and Democracy, University of California, Santa Barbara

"Michael Parrish has fashioned a biography filled with Rauh's spirit, achievements, his losses, and above all, the importance of his presence. This is a wonderful account of a giant of late 20th century political and legal affairs."

Citizen Rauh tells the story of American lawyer Joseph L. Rauh Jr., who kept alive the ideals of New Deal liberalism and broadened those ideals to include a commitment to civil rights. Rauh's clients included Arthur Miller, Lillian Hellman, A. Philip Randolph, and the Mississippi Freedom Democratic Party. With good reason Freedom Rider John Lewis once called him "the blackest white man I ever knew."

No lawyer in the post-1945 era did more to protect the economic interests of working-class Americans than Rauh, who fought for the unions as they struggled for legitimacy and against them when they betrayed their own members. No lawyer stood more courageously against repressive anticommunism during the 1950s or advanced the cause of racial justice more vigorously in the 1960s and 1970s. No lawyer did more to defend the constitutional vision of the Warren Court and resist the efforts of Richard Nixon and Ronald Reagan to undo its legacy.

Throughout his life, Rauh continued to articulate a progressive vision of law and politics, ever confident that his brand of liberalism would become vital once again when the cycle of American politics took another turn.

Parrish is the author of five other books: Securities Regulation and the New Deal; Felix Frankfurter and His Times; Anxious Decades: America in Prosperity and Depression; The Hughes Court: Justices, Rulings, and Legacy; and The Supreme Court and Capital Punishment: Judging Death. His articles have appeared in the American Historical Review, the Historian, Diplomatic History, the Journal of the Supreme Court Historical Society, and the Yale Law Journal.