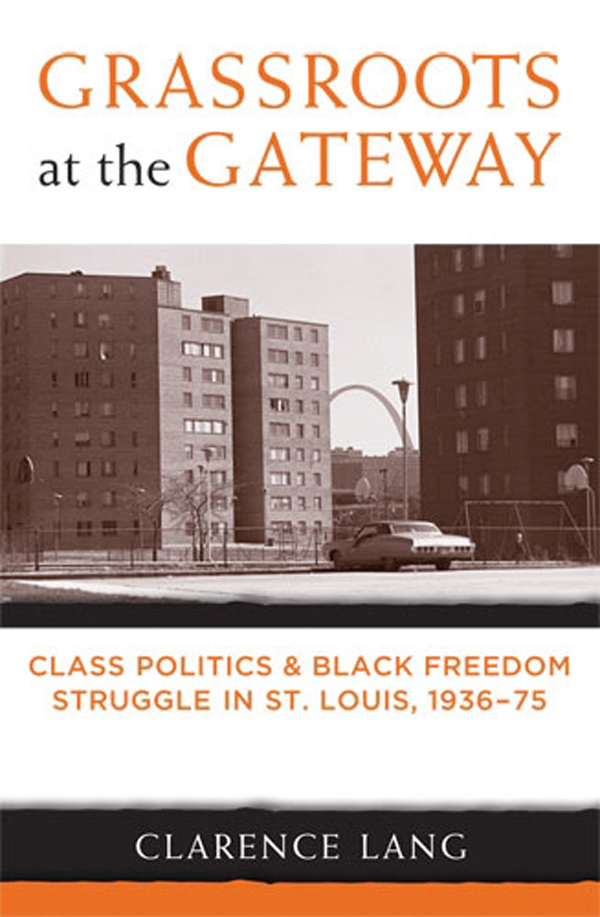 Grassroots at the Gateway: Class Politics and Black Freedom Struggle in St. Louis, 1936-75

You do not have access to this book. How to get access.
"This is a theoretically sophisticated and thoroughly documented historical case study of the movements for African American liberation in St. Louis. Through detailed analysis of black working class mobilization from the depression years to the advent of Black Power, award-winning historian Clarence Lang describes how the advances made in earlier decades were undermined by a black middle class agenda that focused on the narrow aims of black capitalists and politicians. The book is a major contribution to our understanding of the black working class insurgency that underpinned the civil rights and Black Power campaigns of the twentieth century."

"A major work of scholarship that will transform historical understanding of the pivotal role that class politics played in both civil rights and Black Power activism in the United States. Clarence Lang's insightful, engagingly written, and well-researched study will prove indispensable to scholars and students of postwar American history."

Breaking new ground in the field of Black Freedom Studies, Grassroots at the Gateway reveals how urban black working-class communities, cultures, and institutions propelled the major African American social movements in the period between the Great Depression and the end of the Great Society. Using the city of St. Louis in the border state of Missouri as a case study, author Clarence Lang undermines the notion that a unified "black community" engaged in the push for equality, justice, and respect. Instead, black social movements of the working class were distinct from---and at times in conflict with---those of the middle class. This richly researched book delves into African American oral histories, records of activist individuals and organizations, archives of the black advocacy press, and even the records of the St. Louis' economic power brokers whom local black freedom fighters challenged. Grassroots at the Gateway charts the development of this race-class divide, offering an uncommon reading of not only the civil rights movement but also the emergence and consolidation of a black working class.

Clarence Lang is Assistant Professor in African American Studies and History at the University of Illinois at Urbana-Champaign.