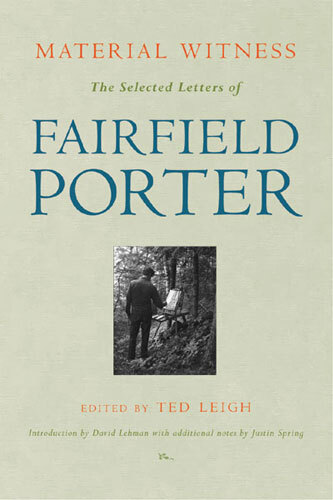 Ted Leigh, Editor 2005
"The publication of Porter's letters marks an occasion for a renewed celebration of his painting and an appreciation of his quirky, indeed ornery, personality. Porter was a feisty correspondent, who fearlessly entered the intellectual discourse of his time."

---From the introduction by David Lehman

"In this lifetime of letters, Fairfield Porter reveals the complexity and passion of a protagonist in a novel by Dostoevsky or Henry James."

Fairfield Porter (1907-75) has been called by poet John Ashbery "perhaps the major American artist of the century." He was also known as a gifted art critic.

Beyond shedding light on his personal views, this collection of Fairfield Porter's letters demonstrates his profound contribution to American art and literature and displays his acumen as a political critic. The letters tell the story of a reserved artist and intellectual, torn between the tensions and pressures he felt among politics, family life, and painting-a man who forged a painting style outside the politically correct artistic perceptions of both left and right.

The collection includes letters from Porter's early travels to the Soviet Union, including a description of an interview with Trotsky, as well as some of his later letters to close friends, including Frank O'Hara, Kenneth Koch, Rod Padgett, Larry Rivers, and James Schuyler, among others. While the letters reveal many sides of the brilliant and independent-minded Porter, they also provide a cultural context for the time period and the circle of artists and poets with whom Porter associated. The letters not only tell a story of the artist himself but are also valuable documents of the political and artistic upheavals of the 1930s, 40s, and 50s.

This rich collection is introduced by poet and critic David Lehman and includes notes by Justin Spring, author of Porter's biography.