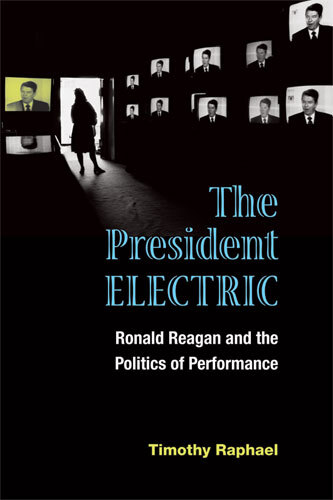 The President Electric: Ronald Reagan and the Politics of Performance

Timothy Raphael 2009
"In this illuminating, multi-pronged cultural and performance history of such phenomena as Chautauqua and radio, movies, and electrical technology, Timothy Raphael puts together a compelling and sometimes revelatory narrative of how commandingly Reagan mastered the matrix of performance, technology, media, celebrity, and the 'republic of consumption' he came of age in."

"Garry Wills and others have written well on the phenomenon of Ronald Reagan, the actor-president, but this is the first book by a real authority---trained in performance and fully reflective about it from the inside . . . unquestionably an important contribution to the disciplinary fields of American studies and performance studies, and an important contribution to public affairs."

When Ronald Reagan first entered politics in 1965, his public profile as a performer in radio, film, television, and advertising and his experience in public relations proved invaluable political assets. By the time he left office in 1989, the media in which he trained had become the primary source for generating and wielding political power. The President Electric: Ronald Reagan and the Politics of Performance reveals how the systematic employment of the techniques and technologies of mass-media performance contributed to Reagan's rise to power and defined his style of governance.

The President Electric stands out among books on Reagan as the first to bring the rich insights of the field of performance studies to an understanding of the Reagan phenomenon, connecting Reagan's training in electronic media to the nineteenth-century notion of the "fiat of electricity"---the emerging sociopolitical power of three entities (mechanical science, corporate capitalism, and mass culture) that electric technology made possible. The book describes how this new regime of cultural and political representation shaped the development of the electronic mass media that transformed American culture and politics and educated Ronald Reagan for his future role as president.

Timothy Raphael is Assistant Professor of Visual and Performing Arts and Director of the Center for Immigration at Rutgers University, Newark.