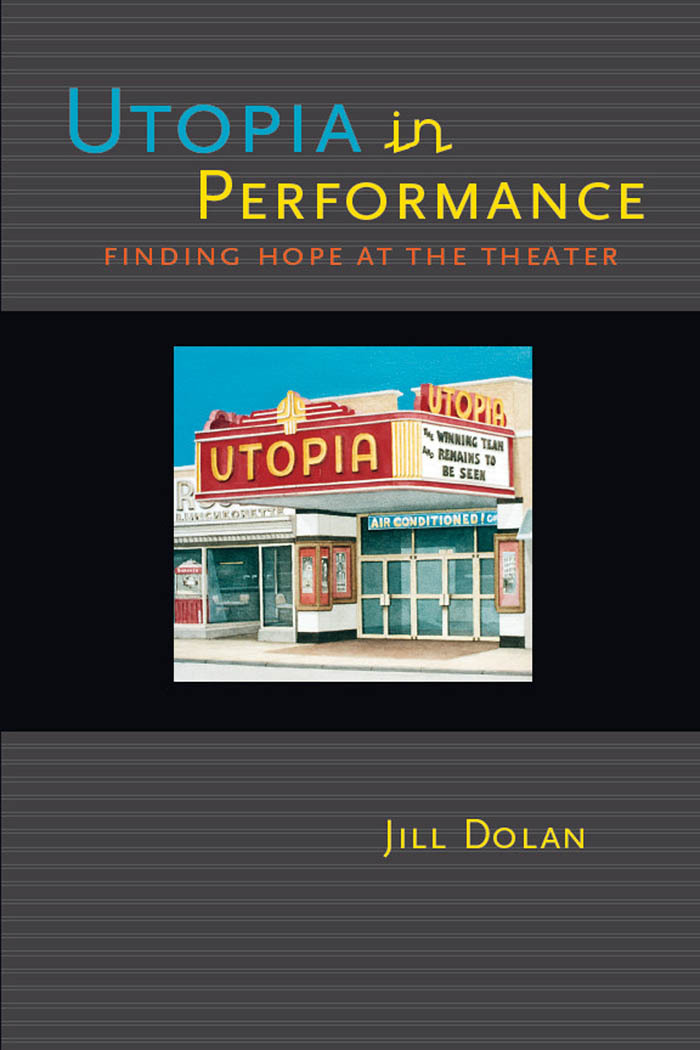 Utopia in Performance: Finding Hope at the Theater

Jill Dolan 2005
"Jill Dolan is the theatre's most astute critic, and this new book is perhaps her most important. Utopia in Performance argues with eloquence and insight how theatre makes a difference, and in the process demonstrates that scholarship matters, too. It is a book that readers will cherish and hold close as a personal favorite, and that scholars will cite for years to come."

What is it about performance that draws people to sit and listen attentively in a theater, hoping to be moved and provoked, challenged and comforted? In Utopia in Performance, Jill Dolan traces the sense of visceral, emotional, and social connection that we experience at such times, connections that allow us to feel for a moment not what a better world might look like, but what it might feel like, and how that hopeful utopic sentiment might become motivation for social change.

She traces these "utopian performatives" in a range of performances, including the solo performances of feminist artists Holly Hughes, Deb Margolin, and Peggy Shaw; multicharacter solo performances by Lily Tomlin, Danny Hoch, and Anna Deavere Smith; the slam poetry event Def Poetry Jam; The Laramie Project; Blanket, a performance by postmodern choreographer Ann Carlson; Metamorphoses by Mary Zimmerman; and Deborah Warner's production of Medea starring Fiona Shaw. While the book richly captures moments of "feeling utopia" found within specific performances, it also celebrates the broad potential that performance has to provide a forum for being human together; for feeling love, hope, and commonality in particular and historical (rather than universal and transcendent) ways.