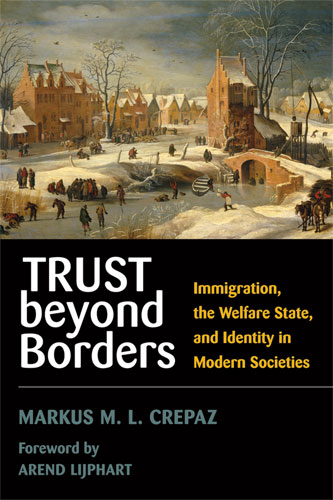 Trust beyond Borders: Immigration, the Welfare State, and Identity in Modern Societies

You do not have access to this book. How to get access.
Will immigration undermine the welfare state? Trust beyond Borders draws on public opinion data and case studies of Germany, Sweden, and the United States to document the influence of immigration and diversity on trust, reciprocity, and public support for welfare programs. Markus M. L. Crepaz demonstrates that we are, at least in some cases, capable of trusting beyond borders: of expressing faith in our fellow humans and extending help without regard for political classifications.

In Europe, the welfare state developed under conditions of relative homogeneity that fostered high levels of trust among citizens, while in America anxiety about immigration and diversity predated the emergence of a social safety net. Looking at our new era of global migration, Crepaz traces the renewed debate about "us" versus "them" on both sides of the Atlantic and asks how it will affect the public commitment to social welfare. Drawing on the literatures on immigration, identity, social trust, and the welfare state, Trust beyond Borders presents a novel analysis of immigration's challenge to the welfare state and a persuasive exploration of the policies that may yet preserve it.

"Crepaz contributes much to our knowledge about the link between immigration and social welfare, certainly one of the central issues in current national and international politics."

"Finally! A book that challenges the growing view that ethnic diversity is the enemy of social solidarity. It addresses an issue of intense debate in Western nations; it takes dead aim at the theoretical issues at the center of the controversy; it deploys an impressive array of empirical evidence; and its conclusions represent a powerful corrective to the current drift of opinion. Trust beyond Borders will rank among the very best books in the field."

"Do mass immigration and ethnic diversity threaten popular support for the welfare state? Trust beyond Borders answers no. Marshaling an impressive array of comparative opinion data, Crepaz shows that countries with high levels of social trust and universal welfare state arrangements can avoid the development of the welfare chauvinism that typically accompanies diversity."

Markus M. L. Crepaz is Professor in the Department of International Affairs at the University of Georgia and Associate Director of the Center for the Study of Global Issues (GLOBIS).