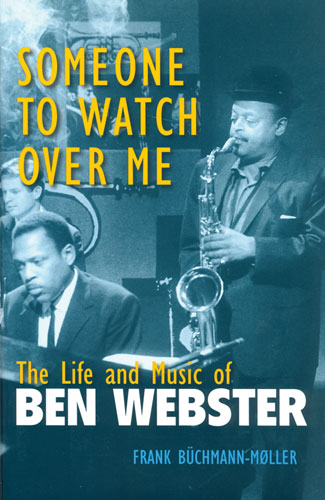 Someone to Watch Over Me: The Life and Music of Ben Webster

You do not have access to this book. How to get access.
For a half century, Ben Webster, one of the "big three" of swing tenors-along with Coleman Hawkins and Lester Young-was one of the best-known and most popular saxophonists.

Early in his career, Webster worked with many of the greatest orchestras of the time, including those led by Willie Bryant, Cab Calloway, Benny Carter, Fletcher Henderson, Andy Kirk, Bennie Moten, and Teddy Wilson. In 1940 Webster became Duke Ellington's first major tenor soloist, and during the next three years he played on many famous recordings, including "Cotton Tail."

Someone to Watch Over Me tells, for the first time, the complete story of Ben Webster's brilliant and troubled career. For this comprehensive study of Webster, author Frank Büchmann-Møller interviewed more than fifty people in the United States and Europe, and he includes numerous translated excerpts from European periodicals and newspapers, none previously available in English. In addition, the author studies every known Webster recording and film, including many private recordings from Webster's home collection not available to the public.

Exhaustively researched, this is a much needed and long overdue study of the life and music of one of jazz's most important artists.