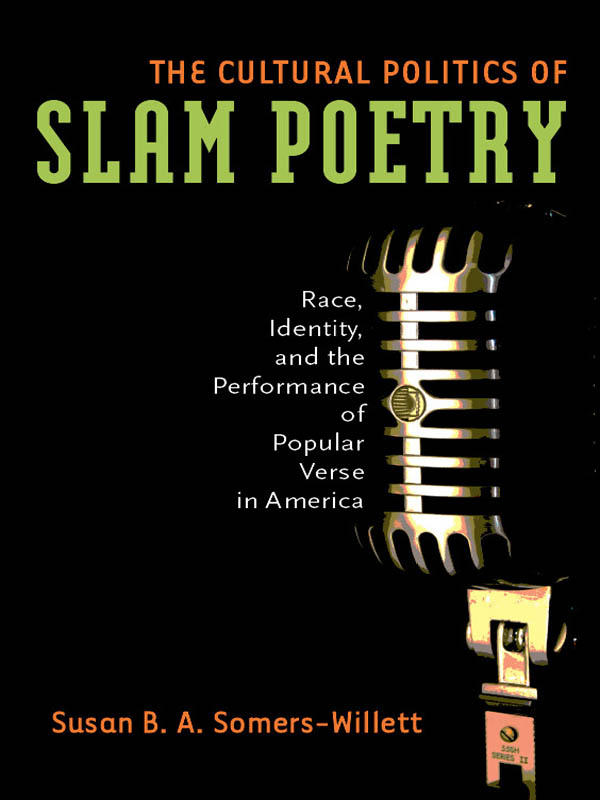 The Cultural Politics of Slam Poetry: Race, Identity, and the Performance of Popular Verse in America

You do not have access to this book. How to get access.
"For a lucid and thorough 'real-world' analysis of the movement from the ground-up--including its history, aesthetics, and culture, there is surely no better place to start than Somers-Willett's trailblazing book."

"Finally, a clear, accurate, and thoroughly researched examination of slam poetry, a movement begun in 1984 by a mixed bag of nobody poets in Chicago. At conception, slam poetry espoused universal humanistic ideals and a broad spectrum of participants, and especially welcome is the book's analysis of how commercial marketing forces succeeded in narrowing public perception of slam to the factionalized politics of race and identity. The author's knowledge of American slam at the national level is solid and more authentic than many of the slammers who claim to be."

The cultural phenomenon known as slam poetry was born some twenty years ago in white working-class Chicago barrooms. Since then, the raucous competitions have spread internationally, launching a number of annual tournaments, inspiring a generation of young poets, and spawning a commercial empire in which poetry and hip-hop merge.

The Cultural Politics of Slam Poetry is the first critical book to take an in-depth look at slam, shedding light on the relationships that slam poets build with their audiences through race and identity performance and revealing how poets come to celebrate (and at times exploit) the politics of difference in American culture.

With a special focus on African American poets, Susan B. A. Somers-Willett explores the pros and cons of identity representation in the commercial arena of spoken word poetry and, in doing so, situates slam within a history of verse performance, from blackface minstrelsy to Def Poetry. What's revealed is a race-based dynamic of authenticity lying at the heart of American culture. Rather than being mere reflections of culture, Somers-Willett argues, slams are culture---sites where identities and political values get publicly refigured and exchanged between poets and audiences.

Susan B. A. Somers-Willett is a decade-long veteran of slam and teaches creative writing and poetics as an Assistant Professor of English at Montclair State University. She is the author of two books of poetry, Quiver and Roam. Visit the author's website at: http://www.susansw.com/.