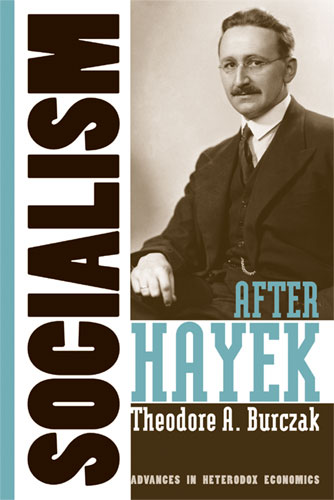 You do not have access to this book. How to get access.
Socialism after Hayek recasts and reinvigorates the socialist quest for class justice by rendering it compatible with Hayek's social and economic theories. Theodore A. Burczak puts forth a conception of socialism from a postmodern perspective, drawing from the apparently opposing ideas of Marx and Hayek (the latter of whom achieved worldwide recognition in the twentieth century as a champion of the free market and fierce opponent of government interference in markets). Burczak sketches an institutional structure that would promote a democratic socialist notion of distributive justice and his own interpretation of Marx's notion of freely associated labor, while avoiding Hayek's criticisms of centrally planned socialism.

Burczak's version of market socialism is one in which privately owned firms are run democratically by workers, governments engage in ongoing redistribution of wealth to support human development, and markets are otherwise unregulated. Burczak poses this model of "free market socialism" against other models of socialism, especially those developed by John Roemer, Michael Albert, and Robin Hahnel.

"Burczakian socialism = (Hayek + Nussbaum + Sen + Ackerman + Resnick and Wolff) = Ellerman = legal-economic democracy. Brilliant! Burczak takes Hayek, his critics, and other social theorists and produces the foundations of a legal-economic order in which the concerns of most current thinkers are provided for. It is a deep, sustained, and brilliant achievement."

—Warren J. Samuels, Professor Emeritus, Economics Department, Michigan State University; former President of the History of Economics Society and the Association for Social Economics; coeditor of the Journal of Income Distribution; and author of over 40 books

"Theodore A. Burczak's Socialism after Hayek is a thoroughly researched and thoughtful examination not only of the ideological debate that framed the twentieth century, but of Hayek's intellectual framework. Burczak hopes for an economic framework that is both humanistic in its approach and humanitarian in its concern while being grounded in good reasons. The book should be on the reading list of every comparative political economist and in particular anyone who wants to take Hayek seriously, including those who would like to push Hayek's classical liberal politics toward the left in the twenty-first century. Burczak has made an outstanding contribution to the fields of political and economic thought and to Hayek studies in particular."

"An advance well beyond the great 'socialist calculation debate.'  Socialism after Hayek is both novel and challenging to contemporary Hayekian scholars.  Burczak is the only scholar working in the post-Marxist tradition that thoroughly understands and appreciates the Hayekian critique of socialism.  He is on his way to answering many of our long-held objections."

"One does not have to agree with all of Burczak's arguments to accept that he has developed a bold, creative and challenging response to the powerful Hayekian critique of socialism. Burczak wisely rejects the agoraphobia—literally the fear of markets—of many socialists, and focuses instead on the socialist goal of the abolition of exploitation. If this important book is read by both socialists and Hayekians, then there is a chance that debates on the viability of socialism may avoid some past pitfalls."

"Provocative and expansive. An excellent book that deals in depth with the relevant literature, incorporating it into a new analysis of the question of socialism. . . . The scholarship is superior: Burczak integrates the works of Hayek and Marx to develop a new t