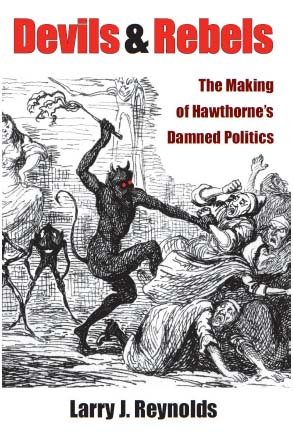 Devils and Rebels: The Making of Hawthorne's Damned Politics

You do not have access to this book. How to get access.
"An outstanding combination of literary interpretation and cultural and historical context that will be an important addition to the critical literature on Hawthorne."

"It is difficult to imagine a more timely book than Devils and Rebels. Examining the role of the public intellectual and writer during a time of political conflict and war, Reynolds takes up his charges with great precision and historical finesse. What particularly distinguishes this book is its attention to the ways in which one of this country's most important authors struggled to resist the waves of political extremism and patriotic hysteria that swept around him."

Widely condemned even in his own time, Nathaniel Hawthorne's views on abolitionism and slavery are today frequently characterized by scholars as morally reprehensible. Devils and Rebels explores the historical and biographical record to reveal striking evidence of the author's true political values---values grounded in pacifism and resistant to the kind of binary thinking that could lead to violence and war.

The book offers fresh readings of not only Hawthorne's four major romances but also some of his less familiar works like "Legends of the Province House," The Whole History of Grandfather's Chair, Journal of an African Cruiser, The Life of Franklin Pierce, and "Septimius Felton." Reynolds argues that Hawthorne---whether in his politics or his art---drew upon racialized imagery from America's past revolution and war on witchcraft to create a politics of quiet imagination, alert to the ways in which New England righteousness could become totalitarian by imposing its narrow view of the world on others.

Meticulously researched and cogently argued, this groundbreaking work demonstrates the need to examine perspectives and values from beyond the New England region when studying the literary history of the American Renaissance and illuminates the difficulties faced by public intellectuals during times of political strife---an issue as relevant today as it was some one hundred and fifty years ago.

Larry J. Reynolds is Thomas Franklin Mayo Professor of Liberal Arts and Professor of English at Texas A&M University. His previous books include A Historical Guide to Nathaniel Hawthorne, National Imaginaries, American Identities: The Cultural Work of American Iconography, and European Revolutions and the American Literary Renaissance as well as an edition of the European writings of Margaret Fuller.