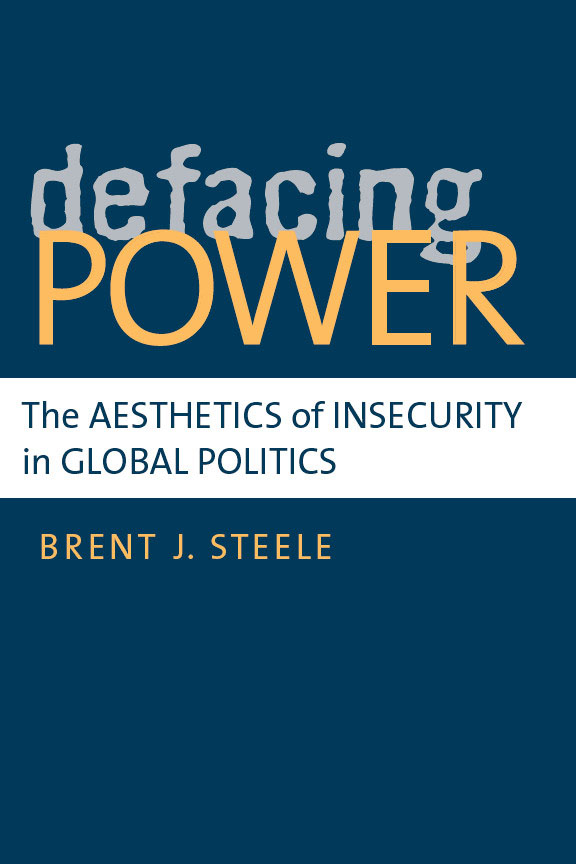 Defacing Power: The Aesthetics of Insecurity in Global Politics

You do not have access to this book. How to get access.
"Combining a rich and varied set of theoretical insights with a subtle analysis of the politics of American foreign policy, Defacing Power marks an important contribution toward understanding the power of identity in world politics. Engagingly written and rigorously argued, Steele's challenging analysis is incisive, important, and rewarding."

"Brent Steele's marvelous excavation of the aesthetic dimensions of power is strikingly irreverent, inasmuch as he displays no commitment to ex ante disciplinary or substantive constraints in his quest to disclose those moments of creative action so often overlooked by theories and theorists wedded to the grandiose and the transhistorical. Steele samples and remixes a myriad of sources, arranging them so as to produce a transgressively insightful account of how 'work on the Self,' often condemned as self-indulgent by prior generations of intellectuals, might just point in the direction of a more sustainably secure world."

"Defacing Power successfully integrates work from Dewey to Morgenthau to Foucault, as well as a wide range of contemporary international relations scholars, in its genealogy of power conceptualizations and characteristics. This book is theoretically sophisticated and serious. It should be of interest to students of international politics, international theory, social theory, and foreign policy."

Defacing Power investigates how nation-states create self-images in part through aesthetics and how these images can be manipulated to challenge those states' power. Although states have long employed media, such as radio, television, and film, for their own image-making purposes, counterpower agents have also seized upon new telecommunications technologies. Most recently, the Internet has emerged as contested territory where states and other actors wage a battle of words and images.

Moving beyond theory, Brent Steele illustrates his provocative argument about the vulnerability of power with examples from recent history: the My Lai Massacre and the Tet Offensive, September 11 and the al-Qaeda communiqués, the atrocities at Fallujah and Abu Ghraib, and the U.S. response to the Asian tsunami of December 2004. He demonstrates how a nation-state---even one as powerful as the United States---comes to feel threatened not only by other nation-states or terrorist organizations but also by unexpected events that challenge its self-constructed image of security. At the same time, Steele shows that as each generation uses available media to create and re-create a national identity, technological innovations allow for the shifting, upheaval, and expansion of the cultural structure of a nation.

Brent J. Steele is Associate Professor of Political Science at the University of Kansas.