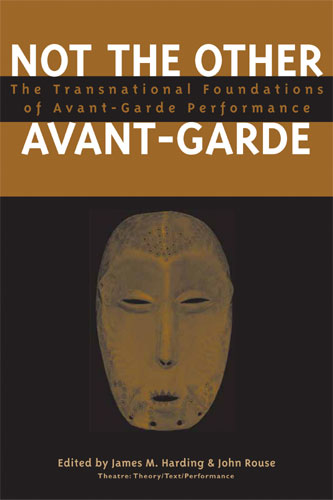 Not the Other Avant-Garde: The Transnational Foundations of Avant-Garde Performance

You do not have access to this book. How to get access.
Almost without exception, studies of the avant-garde take for granted the premise that the influential experimental practices associated with the avant-garde began primarily as a European phenomenon that in turn spread around the world. These ten original essays, especially commissioned for Not the Other Avant-Garde, forge a radically new conception of the avant-garde by demonstrating the many ways in which the first- and second-wave avant-gardes were always already a transnational phenomenon, an amalgam of often contradictory performance traditions and practices developed in various cultural locations around the world, including Africa, the Middle East, Mexico, Argentina, India, and Japan. Essays from leading scholars and critics-including Marvin Carlson, Sudipto Chatterjee, John Conteh-Morgan, Peter Eckersall, Harry J. Elam Jr., Joachim Fiebach, David G. Goodman, Jean Graham-Jones, Hannah Higgins, and Adam Versényi-suggest collectively that the very concept of the avant-garde is possible only if conceptualized beyond the limitations of Eurocentric paradigms.

Not the Other Avant-Garde is groundbreaking in both avant-garde studies and performance studies and will be a valuable contribution to the fields of theater studies, modernist studies, art history, literature, and music history.

"Joins the growing field of critical and transnational theories on the arts. . . its grounding in live performance and its foregrounding of the performative human body presents a new theoretical paradigm that is pathbreaking."

James M. Harding is Associate Professor of English at Mary Washington University. He is author of Adorno and "A Writing of the Ruins": Essays on Modern Aesthetics and Anglo-American Literature and Culture and editor of Contours of the Theatrical Avant-Garde: Performance and Textuality.

John Rouse is Associate Professor of Theater at the University of California, San Diego. He is author of Brecht and the West German Theatre.