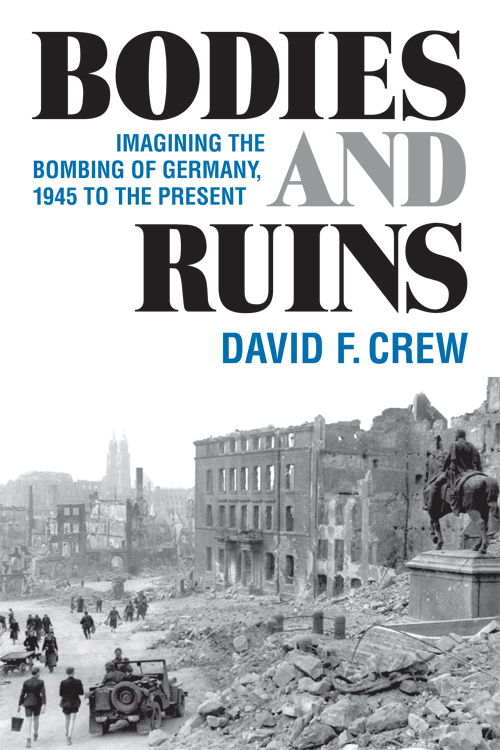 Bodies and Ruins: Imagining the Bombing of Germany, 1945 to the Present

David F. Crew 2017
Bodies and Ruins explores changing German memories of World War II as it analyzes the construction of narratives in the postwar period including the depiction of the bombing of individual German cities. The book offers a corrective notion rising in the late 1990s notion that discussions of the Allied bombing were long overdue, because Germans who had endured the bombings had largely been condemned to silence after 1945. David Crew shows that far from being marginalized in postwar historical consciousness, the bombing war was in fact a central strand of German memory and identity. Local narratives of the bombing war, including photographic books, had already established themselves as important "vectors of memory" in the late 1940s and early 1950s. The bombing war had allowed Germans to see themselves as victims at a time when the Allied liberation of the concentration camps and the Nuremberg trials presented Germans to the world as perpetrators or at least as accomplices. The bombing war continued to serve this function even as Germans became more and more willing directly to confront the genocide of European Jews—which by the 1960s was beginning to be referred to as the Holocaust.

Bodies and Ruins examines a range of local publications that carried photographic images of German cities destroyed in the air war, images that soon entered the visual memory of World War II. Despite its obvious importance, historians have paid very little attention to the visual representation of the bombing war. This book follows the search for what were considered to be the "right" stories and the "right" pictures of the bombing war in local publications and picture books from 1945 to the present, and is intended for historians as well as general readers interested in World War II, the Allied bombing of German cities, the Holocaust, the history of memory and photographic/visual history.