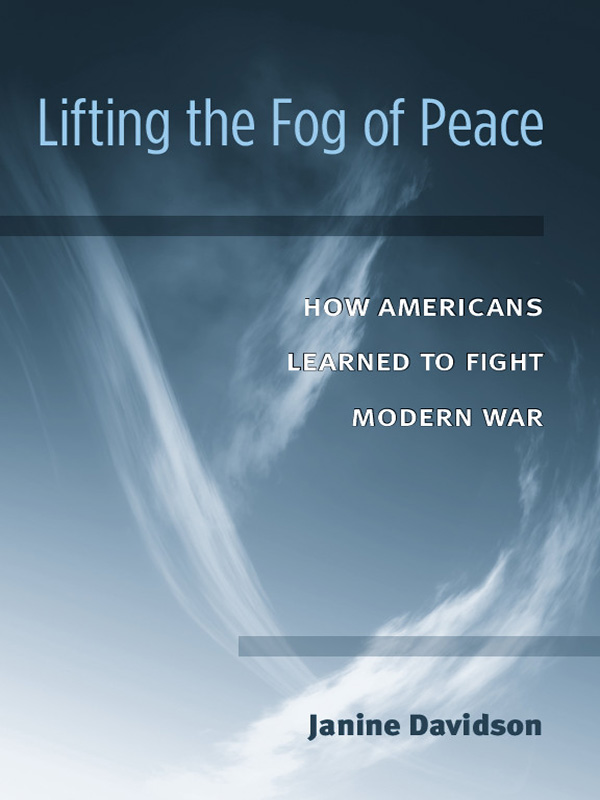 Lifting the Fog of Peace: How Americans Learned to Fight Modern War

You do not have access to this book. How to get access.
"Lifting the Fog of Peace is a captivating study of an agile and adaptive military evolving through the chaos of the post-9/11 world. In what is certain to be regarded as the definitive analysis of the reshaping of American combat power in the face of a complex and uncertain future, Dr. Janine Davidson firmly establishes herself as a rising intellectual star in government and politics. A thoroughly captivating study of organizational learning and adaptation—a 'must read' for leaders in every field."

"In Lifting the Fog of Peace, Dr. Janine Davidson explains how the American military has adapted itself to succeed in the wars in Afghanistan and Iraq that are the most likely future face of combat. The book is informed by her experience of these wars in the Department of Defense, where she now plays a critical role in continuing the process of learning that has so visibly marked the military's performance in today's wars. Highly recommended."

---John A. Nagl, President, Center for a New American Security

"Janine Davidson's Lifting the Fog of Peace is a superb, concise, and well-written book that makes important contributions in three areas. It advances our knowledge of organizational learning in the Armed Forces. It also accurately captures the rich post-Vietnam operational and doctrinal history of the Army and the Marine Corps. The simplistic cartoon of dim-witted generals fixated on the Fulda Gap is replaced here by a more accurate version, where engaged senior officers studied the security environment, absorbed important lessons, and began to improve the learning capacity of the military services. Finally, Lifting the Fog of Peace assesses the state of contemporary stability operations and what must be done to further prepare our Armed Forces for modern war on the low end of the spectrum of conflict. It will be a 'must read' on the E-Ring of the Pentagon and in security studies programs across the nation."

Counterinsurgency and stability operations in Iraq and Afghanistan are only the most recent examples of the U.S. Armed Forces fighting insurgents, building infrastructure, enforcing laws, and governing cities. For more than two centuries, these assignments have been a regular part of the military's tasks; yet until recently the lessons learned from the experiences have seldom been formally incorporated into doctrine and training. As a result, each generation of soldiers has had to learn on the job.

Janine Davidson traces the history of the U.S. military's involvement in these complex and frustrating missions. By comparing the historical record to the current era, Davidson assesses the relative influence of organizational culture and processes, institutional structures, military leadership, and political factors on the U.S. military's capacity to learn and to adapt. Pointing to the case of Iraq, she shows that commanders serving today have benefited at the tactical level from institutional changes following the Vietnam War and from the lessons of the 1990s. Davidson concludes by addressing the question of whether or not such military learning, in the absence of enhanced capabilities and capacity in other U.S. government agencies, will be sufficient to meet the complex challenges of the 21st century.

Janine Davidson, a former Air Force pilot, is a professor of national security at George Mason University, currently serving in the Pentagon as Deputy Assistant Secretary of Defense for Plans.

The views presented in this book are those of the author and do not necessarily represent the views of the Department of Defense or its Components.