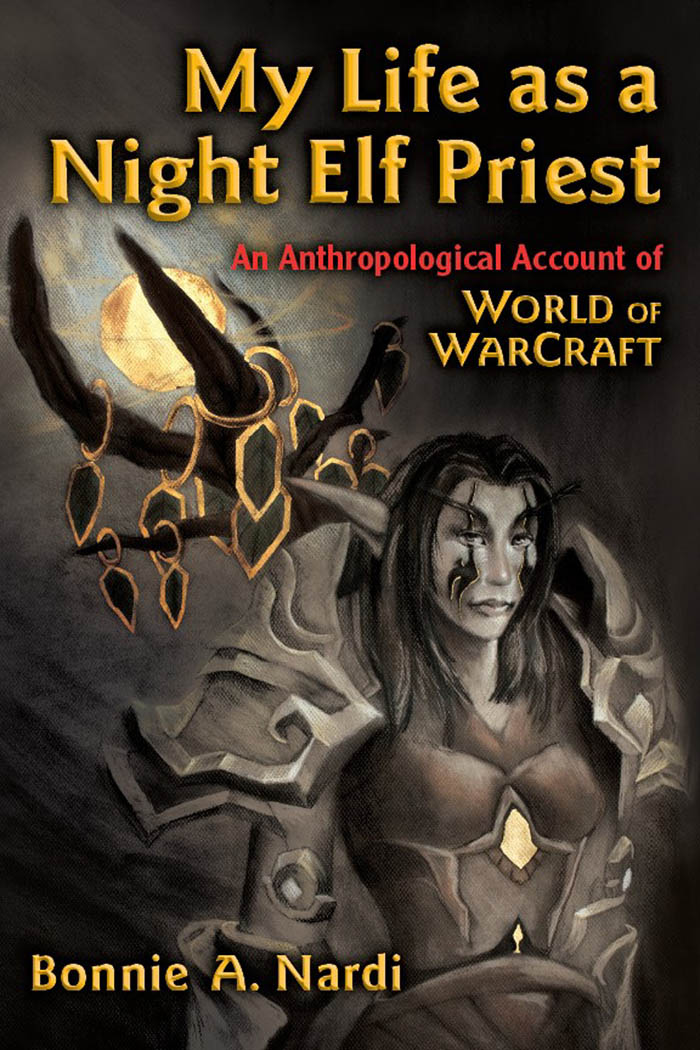 My Life as a Night Elf Priest: An Anthropological Account of World of Warcraft

Open Access
"Ever since the creators of the animated television show South Park turned their lovingly sardonic gaze on the massively multiplayer online game World of Warcraft for an entire episode, WoW's status as an icon of digital culture has been secure. My Life as a Night Elf Priest digs deep beneath the surface of that icon to explore the rich particulars of the World of Warcraft player's experience."

"World of Warcraft is the best representative of a significant new technology, art form, and sector of society: the theme-oriented virtual world. Bonnie Nardi's pioneering transnational ethnography explores this game both sensitively and systematically using the methods of cultural anthropology and aesthetics with intensive personal experience as a guild member, media teacher, and magical quest Elf."

—William Sims Bainbridge, author of The Warcraft Civilization and editor of Online Worlds

"Nardi skillfully covers all of the hot button issues that come to mind when people think of video games like World of Warcraft such as game addiction, sexism, and violence. What gives this book its value are its unexpected gems of rare and beautifully detailed research on less sensationalized topics of interest such as the World of Warcraft player community in China, game modding, the increasingly blurred line between play and work, and the rich and fascinating lives of players and player cultures.  Nardi brings World of Warcraft down to earth for non-players and ties it to social and cultural theory for scholars.  . . . the best ethnography of a single virtual world produced so far."

World of Warcraft rapidly became one of the most popular online world games on the planet, amassing 11.5 million subscribers—officially making it an online community of gamers that had more inhabitants than the state of Ohio and was almost twice as populous as Scotland. It's a massively multiplayer online game, or MMO in gamer jargon, where each person controls a single character inside a virtual world, interacting with other people's characters and computer-controlled monsters, quest-givers, and merchants.

In My Life as a Night Elf Priest, Bonnie Nardi, a well-known ethnographer who has published extensively on how theories of what we do intersect with how we adopt and use technology, compiles more than three years of participatory research in Warcraft play and culture in the United States and China into this field study of player behavior and activity. She introduces us to her research strategy and the history, structure, and culture of Warcraft; argues for applying activity theory and theories of aesthetic experience to the study of gaming and play; and educates us on issues of gender, culture, and addiction as part of the play experience. Nardi paints a compelling portrait of what drives online gamers both in this country and in China, where she spent a month studying players in Internet cafes.

Bonnie Nardi has given us a fresh look not only at World of Warcraft but at the field of game studies as a whole. One of the first in-depth studies of a game that has become an icon of digital culture, My Life as a Night Elf Priest will capture the interest of both the gamer and the ethnographer.

Bonnie A. Nardi is an anthropologist by training and a professor in the Department of Informatics in the Donald Bren School of Information and Computer Sciences at the University of California, Irvine. Her research focus is the social implications of digital technologies. She is the author of A Small Matter of Programming: Perspectives on End User Computing and the coauthor of Information Ecologies: Using Technology with Heart and Acting with Technology: Activity Theory and Interaction