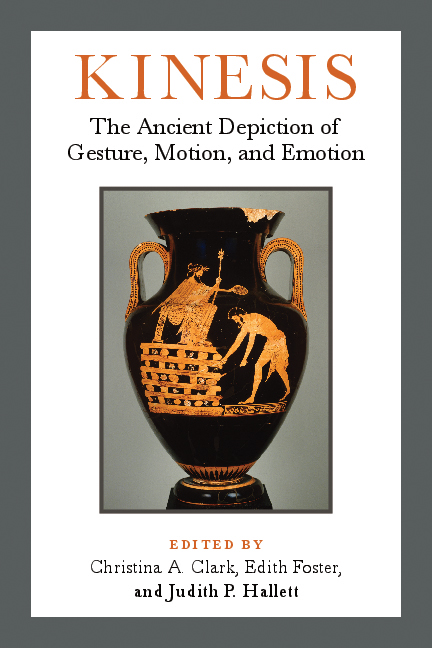 Kinesis: The Ancient Depiction of Gesture, Motion, and Emotion

You do not have access to this book. How to get access.
Donald Lateiner, in his groundbreaking work The Sardonic Smile, presented the first thorough study of nonverbal behavior in Homeric epics, drawing a significant distinction between ancient and modern gesture and demonstrating the intrinsic relevance of this "silent language" to psychological, social, and anthropological studies of the ancient world.

Using Lateiner's work as a touchstone, the scholars in Kinesis analyze the depiction of emotions, gestures, and other nonverbal cues in ancient Greek and Roman texts and consider the precise language used to depict them. Individual contributors examine genres ranging from historiography and epic to tragedy, philosophy, and vase decoration. They explore evidence as disparate as Pliny's depiction of animal emotions, Plato's presentation of Aristophanes' hiccups, and Thucydides' use of verb tenses. Sophocles' deployment of silence is considered, as are Lucan's depiction of death and the speaking objects of the medieval Alexander Romance.

This collection will be valuable to scholars studying Greek and Roman society and literature, as well as to those who study the imitation of ancient literature in later societies. Jargon is avoided and all passages in ancient languages are translated, making this volume accessible to advanced undergraduates.