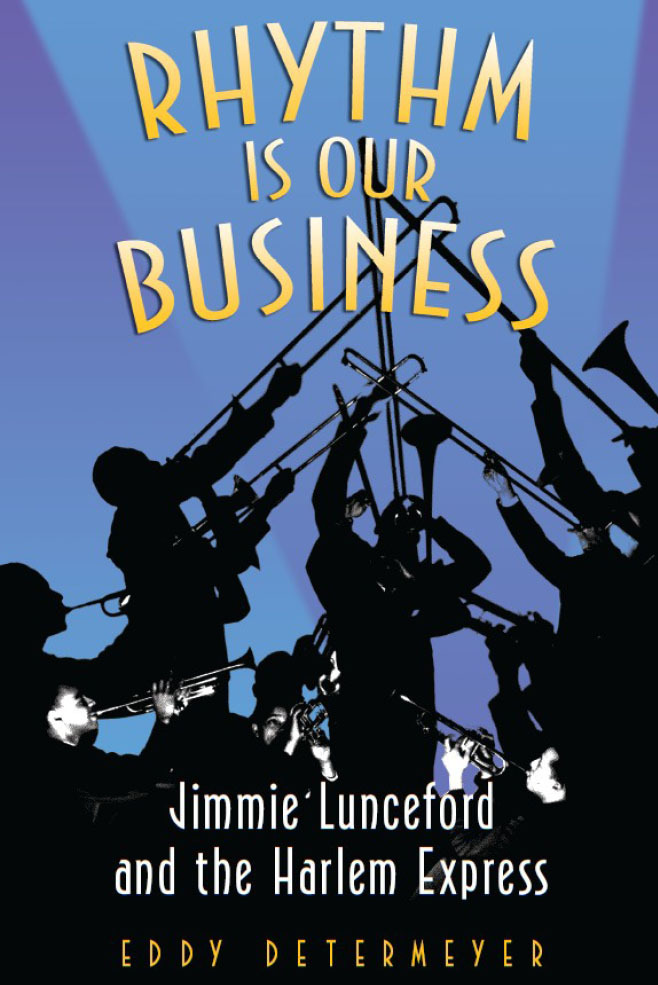 Rhythm Is Our Business: Jimmie Lunceford and the Harlem Express

Eddy Determeyer 2006
"The first detailed study of one of the swing era's most important bands and the first biography of its leader, Jimmie Lunceford. This is a most welcome and significant contribution to the literature of jazz, to our understanding of a vital period in jazz history, and to the music of an outstanding and unique ensemble that was emblematic of the swing era."

"We were more popular than Benny Goodman! We were the first black band that played the Paramount Theater, downtown New York. Not Duke Ellington, not Count Basie. Six weeks in a row, four or five shows daily, and it was packed every day, people lining up around the corner constantly! We could outdraw any band in the country."

"Jimmie Lunceford was a key swing-era figure, and no book covers his biography and music like this one does. Grounded in years of research and inspired by the writer's love of his subject, the book fills a critical gap in the jazz literature and will be essential reading for all swing aficionados."

"It was Jimmie Lunceford and his orchestra that inspired me to become a musician. I was eleven years old at the time. When I heard that band play I said to myself, 'That's for me. I want to become a musician.' I still get inspired when I listen to some of their recordings. The Jimmie Lunceford Orchestra is one of the great jazz orchestras of all time."

"Jimmie Lunceford has the best of all bands. Duke is great, Basie is remarkable, but Lunceford tops them both."

In the 1930s, swing music reigned, and the Jimmie Lunceford Orchestra was the hottest and hippest attraction on the black dance circuits. Known for its impeccable appearance and infectious rhythms, Lunceford's group was able to out-swing and outdraw any band. For ten consecutive years, they were the best-loved attraction at Harlem's famed Apollo Theater. The group's hit recordings sold in the hundreds of thousands, and Jimmie Lunceford's band rivaled Ellington's for popularity in the African American community.

Jimmie Lunceford was also an innovator, elevating big-band showmanship to an art and introducing such novel instruments as the electric guitar and bass. The band's arrangements, written by Sy Oliver, Edwin Wilcox, Gerald Wilson, Billy Moore, Jr., and Tadd Dameron, were daring and forward looking, influencing generations of big-band writers.

Rhythm Is Our Business traces the development of the Jimmie Lunceford Orchestra from its infant days as a high school band in Memphis to its record-breaking tours across the United States, Canada, and Europe. The book also unveils Lunceford's romantic yet ill-fated involvement with Yolande Du Bois, daughter of famous writer and opinion leader W.E.B. Du Bois. And by reconstructing Lunceford's last day, the book offers a glimpse into the mysteries surrounding the leader's untimely death. This is essential reading for anyone interested in the history and legacy of swing.

Eddy Determeyer has been a freelance music journalist for more than three decades. In 1984 Determeyer wrote a seven-part series on Jimmie Lunceford for the Dutch magazine Jazz Nu. Determeyer has written thousands of articles on music for a variety of Dutch publications and is the author of several books. He currently produces the Holiday for Hipsters radio show for Dutch station Concertzender.