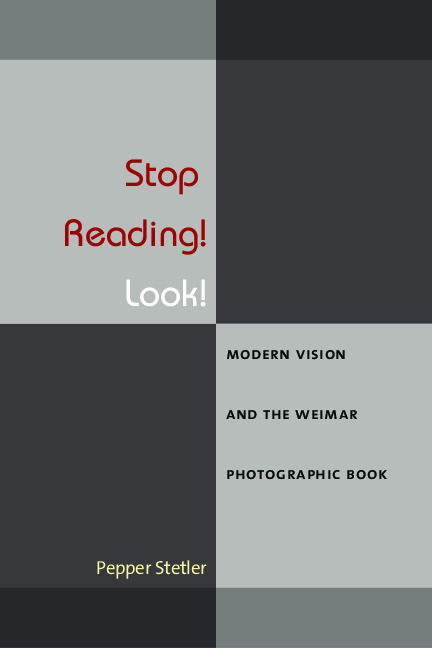 Pepper Stetler 2015
In the second half of the Weimar period (1918–33), photographers produced books consisting almost entirely of sequenced images. The subjects ranged widely: from plants and nature to the modern metropolis, from exotic cultures to the German Volk, from anonymous workers to historical figures. While many of the books were created by key practitioners and theorists of modern photography, scholars have rarely addressed the significance of the book format to modern conceptions of photographic meaning. The term "photo-essay" implies that these photographic books were equivalent to literary endeavors, created by replacing text with images, but such assumptions fail to explore the motivations of the books' makers.

Stop Reading! Look! argues that Weimar photographic books stood at the center of debates about photography's ability to provide uniquely visual forms of perception and cognition that exceed the capacity of the textual realm. Each chapter provides a sustained analysis of a photographic book, while also bringing the cultural, social, and political context of the Weimar Republic to bear on its relevance and meaning.