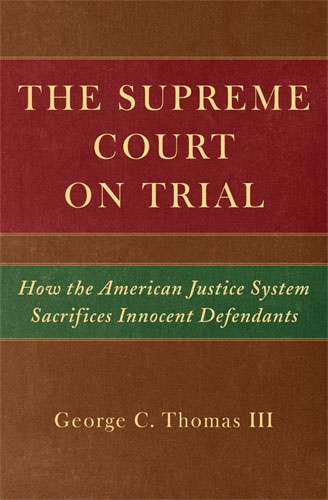 The Supreme Court on Trial: How the American Justice System Sacrifices Innocent Defendants

You do not have access to this book. How to get access.
The chief mandate of the criminal justice system is not to prosecute the guilty but to safeguard the innocent from wrongful convictions; with this startling assertion, legal scholar George Thomas launches his critique of the U.S. system and its emphasis on procedure at the expense of true justice.

Thomas traces the history of jury trials, an important component of the U.S. justice system, since the American Founding. In the mid-twentieth century, when it became evident that racism and other forms of discrimination were corrupting the system, the Warren Court established procedure as the most important element of criminal justice. As a result, police, prosecutors, and judges have become more concerned about following rules than about ensuring that the defendant is indeed guilty as charged. Recent cases of prisoners convicted of crimes they didn't commit demonstrate that such procedural justice cannot substitute for substantive justice.

American justices, Thomas concludes, should take a lesson from the French, who have instituted, among other measures, the creation of an independent court to review claims of innocence based on new evidence. Similar reforms in the United States would better enable the criminal justice system to fulfill its moral and legal obligation to prevent wrongful convictions.

"Thomas draws on his extensive knowledge of the field to elaborate his elegant and important thesis---that the American system of justice has lost sight of what ought to be its central purpose---protection of the innocent."

"Thomas explores how America's adversary system evolved into one obsessed with procedure for its own sake or in the cause of restraining government power, giving short shrift to getting only the right guy. His stunning, thought-provoking, and unexpected recommendations should be of interest to every citizen who cares about justice."

"An unflinching, insightful, and powerful critique of American criminal justice---and its deficiencies. George Thomas demonstrates once again why he is one of the nation's leading criminal procedure scholars. His knowledge of criminal law history and comparative criminal law is most impressive."