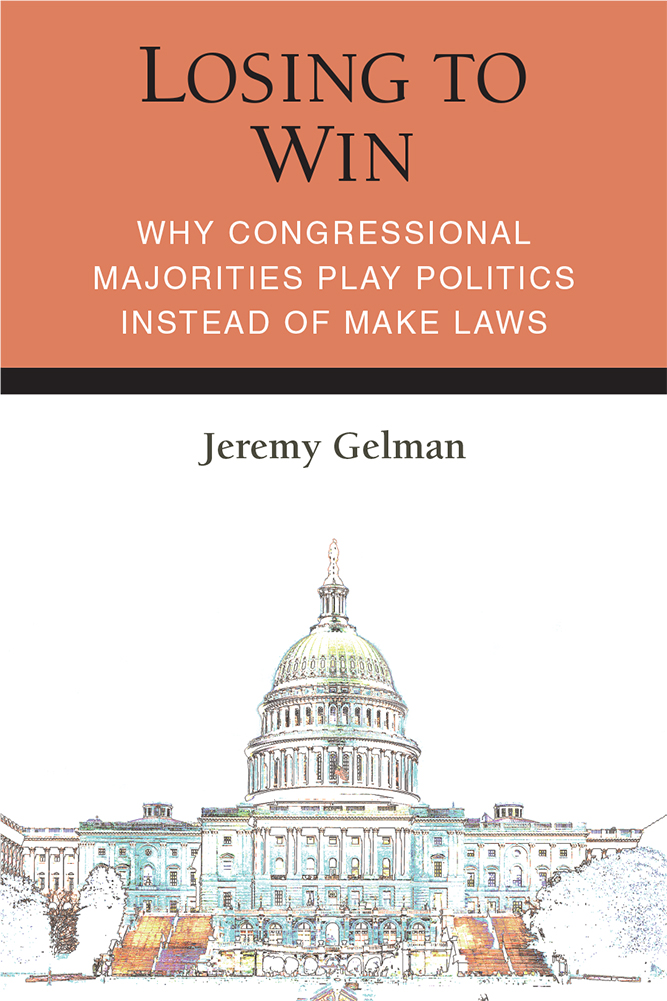 Losing to Win: Why Congressional Majorities Play Politics Instead of Make Laws

You do not have access to this book. How to get access.
Most everyone, voters, political scientists, even lawmakers, think Congress is dysfunctional. Instead of solving problems, Democrats and Republicans spend their time playing politics. These days Capitol Hill seems more a place to bicker, not to pass laws. The reality is more complicated. Yes, sometimes Congress is broken. But sometimes it is productive. What explains this variation? Why do Democrats and Republicans choose to legislate or score political points? And why do some issues become so politicized they devolve into partisan warfare, while others remain safe for compromise?

Losing to Win answers these questions through a novel theory of agenda-setting. Unlike other research that studies bills that become law, Jeremy Gelman begins from the opposite perspective. He studies why majority parties knowingly take up dead-on-arrival (DOA) bills, the ideas everyone knows are going to lose. In doing so, he argues that congressional parties' decisions to play politics instead of compromising, and the topics on which they choose to bicker, are strategic and predictable. Gelman finds that legislative dysfunction arises from a mutually beneficial relationship between a majority party in Congress, which is trying to win unified government, and its allied interest groups, which are trying to enact their policies. He also challenges the conventional wisdom that DOA legislation is political theater. By tracking bills over time, Gelman shows that some former dead-on-arrival ideas eventually become law. In this way, ideas viewed as too extreme or partisan today can produce long-lasting future policy changes.

Through his analysis, Gelman provides an original explanation for why both parties pursue the partisan bickering that voters find so frustrating. He moves beyond conventional arguments that our discordant politics are merely the result of political polarization. Instead, he closely examines the specific circumstances that give rise to legislative dysfunction. The result is a fresh, straightforward perspective on the question we have all asked at some point, "Why can't Democrats and Republicans stop fighting and just get something done?"

Your search has returned 1 resource attached to Losing to Win: Why Congressional Majorities Play Politics Instead of Make Laws