A New Insurgency: The Port Huron Statement and Its Times

Open Access
Read Book
Students for a Democratic Society (SDS) was just one of several new insurgent movements for democracy and social justice during the late 1950s and early 1960s, and it must be understood in the context of other causes and organizations—in the United States and abroad—that inspired its founding manifesto, the Port Huron Statement. In A New Insurgency: The Port Huron Statement and Its Times, a diverse group of more than forty scholars and activists take a transnational approach in order to explore the different—though often interconnected—campaigns that mobilized people along varied racial, ethnic, gender, and regional dimensions from the birth of the New Left in the civil rights and pacifist agitation of the 1950s to the Occupy movements of today.

This volume features three never-before-published “manifesto drafts” written by Tom Hayden in early 1962 that generated the discussion leading to the Port Huron meeting. Other highlights include recollections from leading women in the Port Huron deliberations who, three years later, protested the subordination of women within the radical movements, thus setting the stage for the rise of women’s liberation. A New Insurgency is based on the University of Michigan’s conference commemorating the fiftieth anniversary of the Port Huron Statement in 2012.

“The fiftieth anniversary of the Port Huron Statement has drawn a great number of reflections and commemorations, but this carefully conceived volume offers an account of unrivaled ambition, exceptional breadth, and surprising insight. It both excavates the event itself—vividly, perceptively, exhaustively—and gives it the largest and most illuminating of contexts. A New Insurgency is as close to definitive as any volume of this kind can become.”
—Geoff Eley, Karl Pohrt Distinguished University Professor of Contemporary History, University of Michigan 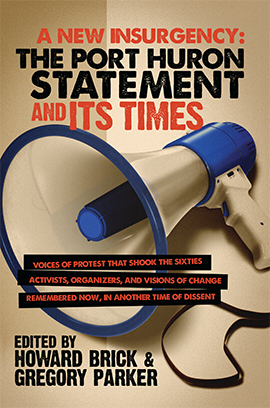