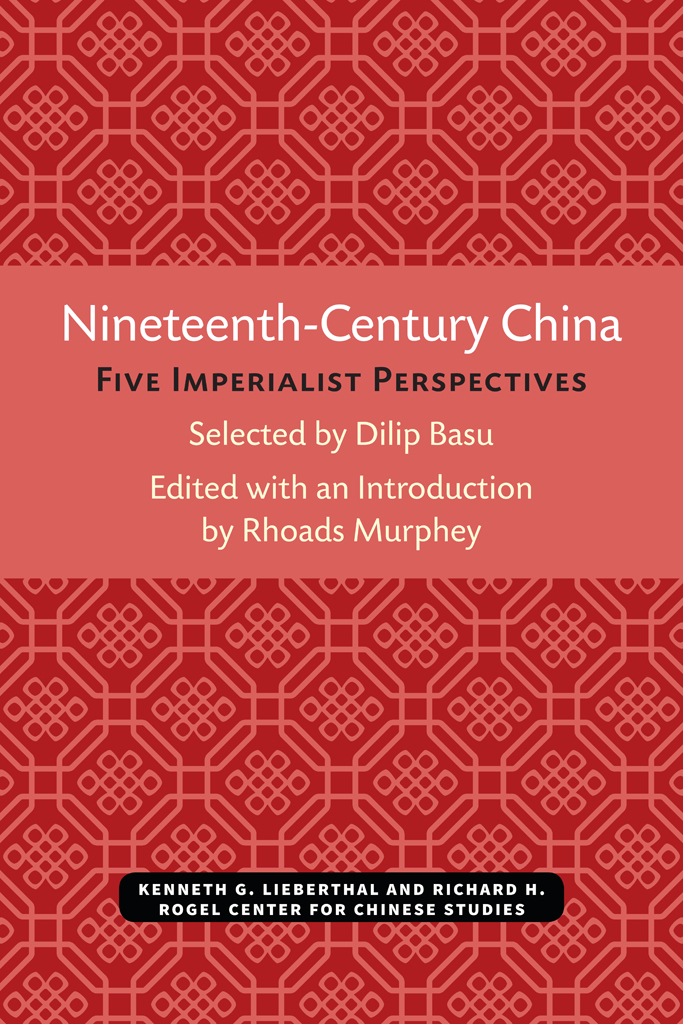 Selected by Dilip Basu. Edited with an introduction by Rhoads Murphey 1972

Open Access
Materials from the past that wrongly anticipate the future, or present information or judgments that are later proved misleading or erroneous, are sometimes overlooked in reconstructing the past. Yet such documents are as legimiate, and perhaps as important, as those that are vindicated by events or continue to share perspectives with later generations.

The five documents reproduced in Nineteenth-Century China are typical of the periods from which they come, but each was overtaken or contradicted by events. Collected with a belief in the legitimacy of attempting to see every period as much as possible in its own terms, these texts offer a glimpse of what China looked like and suggested to Englishmen on the spot in Canton and Hong Kong in the first half of the nineteenth century, and how they viewed their own country and its role vis-à-vis the China they observed.

The first two texts in Nineteenth-Century China exemplify the imperialist mind's eagerness to explore the world, to get a picture of all of its parts, and as rapidly as possible to "open" all areas to the benificent influence of the West, notably through an expanded commerce that would enrich its Western masters. Samuel Ball's "Observations" (1817) show how much detailed information was available to Westerners and what the mercantile British were after, and an anonymous dissertation (1838) provides an example of the dream of the China as El Dorado: an immense population of eager traders, hard workers, and willing buyers. The third text (1845) is an early foreshadowing by a colonial official, R. M. Martin, of Western imperial arguments, rationalizations, and attitudes that would become common fifty years later. The fourth selection consists of an exchange of correspondence in 1847 about British access to and use of land in the vicinity of Canton. A short statement of purpose (1848) from the Morrison Education Society, demonstrating a missionary enterprise combining Christian evangelism and English education, concludes the book.